The roadmap project includes the HyNet scheme, which aims to be piping low-carbon hydrogen to industry in the region by the mid-2020s 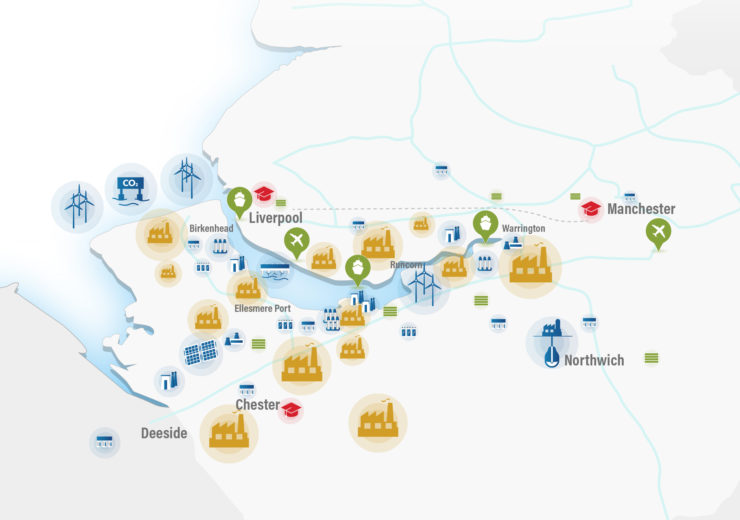 A map of the North West Energy & Hydrogen Cluster

The north-west of England has moved a step closer to becoming the UK’s first net zero carbon industrial cluster after the group spearheading the project received government funding. The North West Energy and Hydrogen Cluster, which comprises public organisations and industry, has received £120,000 – made up of £36,000 in government backing and £74,000 from industry and academia – to help the region achieve this status by 2040.

It’s hoped this roadmap project to decarbonise industry could create 33,000 jobs, deliver more than £4bn investment and save 10 million tonnes of emissions each year.

Chairman Richard Carter – also managing director at chemicals company BASF, which has its UK headquarters in Cheadle, near Manchester – said: “The UK is locked into a net zero emissions target by 2050 and, with industry accounting for a quarter of all emissions, we urgently need a plan to decarbonise our industrial clusters.

“In the north-west, our existing strengths in oil refining, chemical production and automotive manufacturing mean we’re ideally placed to develop solutions that can have a swift and significant impact.

“Businesses in the region are facing some of their most challenging times in decades. As we look to recovery, the clean growth agenda is going to be even more important, helping to secure the future of our industries, attract investment and deliver new jobs.”

The roadmap will identify the projects, technologies and strategic infrastructure required across the region to underpin future private and public sector investment.

After securing the investment from UK Research & Innovation and the Industrial Decarbonisation Challenge Fund (IDCF), along with industry, it will lead to a future funding bid for a share of £8m later this year under phase two of the roadmap project.

The cluster area – which includes Cheshire, parts of north-east Wales, Warrington, Liverpool city region and Greater Manchester – generates about six million tonnes of industrial emissions per year and is home to four million people. Clean energy projects in Lancashire and Cumbria will also be considered in the roadmap.

The roadmap grant has been awarded to Peel Environmental, which works alongside partners including the North West Business Team. The company owns the Protos plant, near Ellesmere Port, which aims to become a cluster for businesses recycling waste into clean energy using new technologies.

Role of HyNet in North West Hydrogen and Energy Cluster

A key part of the north-west’s decarbonisation approach is the work taking place to develop a hydrogen economy, which is being spearheaded by another group called the North West Hydrogen Alliance.

This includes the HyNet, a hydrogen and carbon capture, utilisation and storage (CCUS) project that aims to cut emissions in homes, industry and transport.

It aims to be piping low-carbon hydrogen to industry in the region by the mid-2020s.

HyNet received £13m government funding earlier this year to develop a design for a low-carbon hydrogen production plant at Essar Oil UK’s Stanlow refinery alongside other partners. The plant could be used to fuel manufacturing businesses including Unilever, Essar and Pilkington Glass.

The scheme’s lead Progressive Energy has now received another £120,000 in funding – including £75,000 from government and £44,000 from industry – to initiate front-end engineering and design.

It will now be able to compete for a share of up to £131m in phase two of the IDCF.

Professor Joe Howe, chairman of the North West Hydrogen Alliance and executive director at the University of Chester’s Thornton Energy Research Institute, a project partner, said: “We’re already well on the way to developing a pioneering hydrogen economy in the North West.

“HyNet is by far the UK’s most advanced hydrogen and carbon capture storage project which could see hydrogen piped into homes and businesses as early as 2025.

“It’s not just a concept anymore and this funding will help further develop the engineering required to deliver this groundbreaking project and could see the north-west get million   s more in government funding.”