The Nord Stream 1 pipeline has two leaks northeast of Bornholm, Sweden, and Nord Stream 2 has one leakage in the south of Dueodde, Denmark, in the Baltic Sea 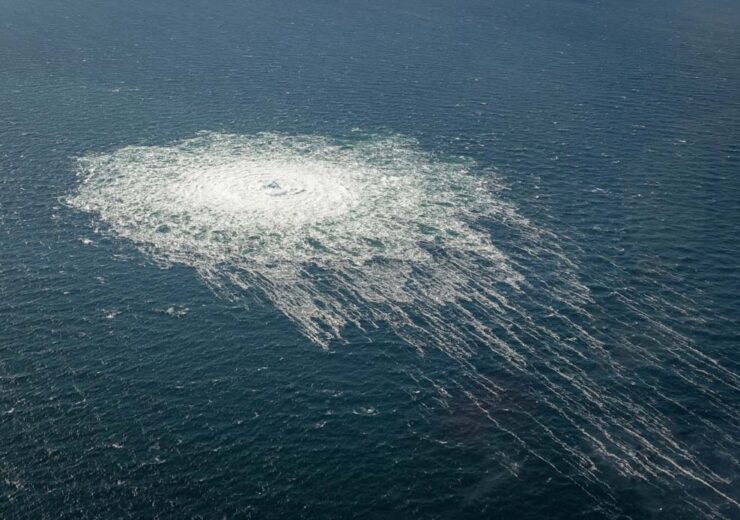 Gas leak in the Baltic Sea. (Credit: The Danish Defence)

The Nord Stream 1 and Nord Stream 2 pipelines, operated by a consortium majority owned by Russia’s Gazprom, were found to have three gas leaks offshore Sweden and Denmark.

According to the Danish army statement, Nord Stream 1 has two leaks northeast of Bornholm, and Nord Stream 2 has one in the south of Dueodde in the Baltic Sea.

The largest of the leaks creates turbulence that measures 1km in diameter on the surface, and the smallest makes around 200m in diameter.

Currently, the Swedish and Danish maritime authorities have demarcated a safety zone around the identified locations, for the safety of the ship and air traffic.

“Nord Stream AG has started mobilisation of all necessary resources for a survey campaign to assess the damages in cooperation exchange with relevant local authorities.

“Currently, it is not possible to estimate a timeframe for restoring the gas transport infrastructure. The causes of the incident will be clarified as a result of the investigation.”

Nord Stream is a 1,224km twin pipeline system that runs from Vyborg, Russia to Lubmin near Greifswald, Germany, through the Baltic Sea.

The pipeline system crosses the Exclusive Economic Zones (EEZ) of Russia, Finland, Sweden, Denmark and Germany, and the territorial waters of Russia, Denmark, and Germany.

After the three gas leaks were identified, the Danish army deployed the frigate Absalon and the pollution control vessel, Gunnar Thorson, along with a helicopter capacity.

The European Union (EU) has commented that leaks in Nord Stream twin gas pipelines were caused by sabotage, reported BBC.

The Danish Defence Command said: “The defence is supporting in connection with the authorities’ efforts regarding the leaks on the Nord Stream gas pipelines in the Baltic Sea.

“The frigate Absalon and the pollution control vessel ship Gunnar Thorson are on their way to carry out water monitoring at the exclusion zones, and the Danish Defence are also supporting with a helicopter capacity.”