The first commercial tidal energy farm in Wales is expected to enter operation in 2015 after the Welsh Government approved its development. 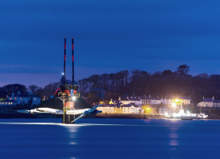 The Skerries tidal array, one of the largest of its kind to be consented in the UK, will be developed by Siemens-owned Marine Current Turbines (MCT) off the north-west coast of Anglesey in North Wales.

Following commissioning – targeted for 2015 – the array will consist of five SeaGen 2MW tidal stream turbines in an area between the Skerries group of rocks and islands and Carmel Head about 1km off the Anglesey coast close to the port of Holyhead, in approximately 20 to 40m water depth.

SeaGen is the first proven full-scale commercial tidal turbine developed by MCT, which has operated successfully in Strangford Lough in Northern Ireland since 2008.

In addition to the generation of eco-friendly electricity for up to 10,000 homes in Anglesey, the 10MW Skerries tidal array will deliver other significant benefits to the local community and supply chain during construction and installation as well as in the long-term through jobs in operations and maintenance and environmental monitoring, Siemens said in a statement. The project will make use of the local port facilities at Holyhead for the installation and operations and maintenance.

"I am delighted to announce that the Welsh Government has granted a Marine Licence for the Skerries Tidal Stream Array project, which moves Wales a step closer to hosting the first scheme of this kind in the UK. This demonstrates the significant benefits of choosing Wales for marine energy investment, with our unique tidal resources, good port facilities and proximity to the grid," said first minister of Wales Carwyn Jones. "We have supported and worked closely with the company from the minute they showed their initial interest in the development of the site, including financial support towards early feasibility studies. The next step is to develop the industry so that tidal power can contribute towards our future energy mix."

Acquiring a Marine Licence from the Welsh Government was part of the eligibility criteria for the Marine Energy Array Demonstration (MEAD) Fund. Granting consent has enabled the Company to secure the award from DECC.

Greg Barker, minister of state, Department of Energy and Climate Change commenting on the MEAD Fund said: "This £20 million will give MeyGen and SeaGeneration Wales the boost they need to leap to the next level and test their innovative turbines in formations out at sea. These projects will provide valuable insight into how best to harness the power of the sea and take us one vital step closer to realising the full potential of marine in our future energy mix. The UK, with its amazing natural resource and outstanding technical know-how is already leading the way on marine power for the rest of the world to follow, and I want to ensure we stay top of this table. I am delighted that MeyGen and SeaGeneration Wales are rising to the challenge and wish them every success."

The approval of the Skerries Scheme by the Welsh Government has followed extensive environmental studies and technical assessments as well as widespread public consultation over the past four years. The consent reflects the ambitions of the Welsh Government to develop a low carbon economy, especially renewable energy sources, such as wind and tidal.

“We welcome the Welsh Government’s decision to grant approval for the Skerries scheme, the largest of its kind in the UK to date. The consent is an important milestone in Wales’ transition to a low carbon economy and the tidal farm will provide a very positive economic boost to Anglesey and North Wales," said Achim Woerner, chief executive officer of Siemens Energy Hydro and Ocean Unit. “We are also delighted that the Skerries project which is being developed by Sea Generation Wales Ltd has been selected for the £10M Marine Energy Array Demonstration award. These developments confirm the viability of the SeaGen technology for larger scale deployment and the overall potential for the sector."