The UK Nuclear Decommissioning Authority has agreed key commercial terms for the sale of its land at Moorside, a nuclear new-build site adjacent to Sellafield in West Cumbria. 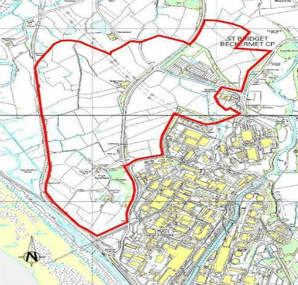 The UK Nuclear Decommissioning Authority has agreed key commercial terms for the sale of its land at Moorside, a nuclear new-build site adjacent to Sellafield in West Cumbria.

The UK prime minister said Toshiba and Westinghouse would pay "more than £200 milion" to build three AP1000s at the site.

In January, they agreed to buy a 60% stake of Moorside developer NuGen, buying out Spanish utility shareholder Iberdrola. The remaining 40% stake would be owned by GDF Suez. If it has to pay the same amount for Moorside as Toshiba and Westinghouse, pro rata, the total value of the land deal would be more than £333 million.

These sums do not include the £102 million that Toshiba and Westinghouse agreed to pay to Iberdrola and GDF Suez in January to take a 60% stake in NuGen.

An important condition of that deal, which as of early May has not been completed, was an extension on the option to buy the Moorside land. The current option, for a 200-hectacre site bought in 2009 for £70 million, expires in October 2014, years before NuGen would be ready to buy it. The length of the option extension has not been announced, nor have the details of the commercial terms agreed.

The Nuclear Decommissioning Authority said that the deal is a key step forward in the development of a new power station at Moorside.

Energy and Climate Change Secretary Ed Davey said: “Moorside means outstanding opportunities for Britain – thousands of jobs during construction and billions of pounds of investment in Britain’s booming energy sector. The new nuclear programme is a core part of our drive to build a new, clean energy sector in Britain to tackle climate change as the same time as we deal with a legacy of underinvestment in Britain’s energy sector, ensure we remain among the most energy secure countries in the world."