The third and last tunnel boring machine (TBM) at the main Kárahnjúkar headrace tunnel has broken through its 11.5km section, marking the completion of the 39.7km long main headrace tunnel, which will generate 4,600GWh/year for the Alcoa aluminum smelter in Iceland. 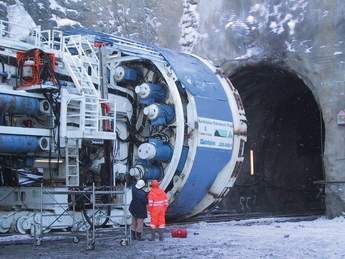 TBM 3 bored its tunnel in sections by negotiating a tight turn with a 700m radius from an access adit to bore half of its leg of the headrace tunnel. The TBM was then pulled back and re-launched from the same adit to bore the other half of the tunnel.

Robbins TBMs 1 and 2 also performed well, finishing their sections of the headrace tunnel in Fall 2006. TBM 2, in particular, went on to tie a world record for boring 92 m in one day (for all machines 7-8m in diameter), despite encountering extremely heavy water inflows and major fault lines in the middle of its bore. TBM 2 broke through at the end of September and is currently being dismantled and transported for work on an additional 8.7km tunnel in 2007, which will bring water from the Ufsarlón water resource to the main headrace tunnel.

The entire tunnel system, spanning 73km in length, is the second largest tunnelling project in Europe after Alp Transit. ‘The project was quite large-and in terms of risk and problematic tunneling like the Alp Transit Project. The risk was quite high, but the project turned out extremely well,’ said Lok Home, President of The Robbins Company. Managing the TBMs in the remote environment of the Fljotsdalur Valley was part of the risk. The jobsite was located several hours from the nearest town, and required good coordination between all parties involved in order to assure that spare parts and equipment arrived on time.

The project also made advances by using novel technology, including back-loading 19 inch disc cutters. No adverse effects were seen for the duration of the project from the use of these cutters. The TBMs benefited from the larger diameter design, which increased cutter life compared to 17 inch disc cutters, and allowed the machines to advance well even in very hard rock.