The world’s first Straflomatrix turbine has begun trial operations at a small hydro power plant in Austria. The Agonitz power plant was re-opened on 26 June following an upgrade that is to boost its overall output. 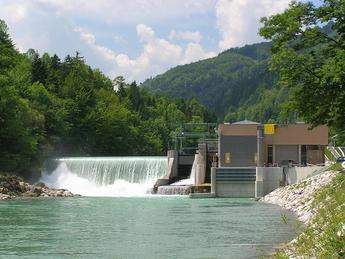 The facility is now operating with one vertical Kaplan turbine and one VA Tech Hydro Straflomatrix unit. Together the turbines have a generating capacity of 3.1MW, representing a 350% increase in output.

The water flow that Straflomatrix uses to generate electricity is constant so it can operate without the need for costly regulation technology, says VA Tech. Irrigation dams and weir systems that are not currently being used for energy generation are to be target application sites. While the simple design of Straflomatrix makes it potentially useful in developing countries, interest has also come from the US and Canada.

The unit in operation at Agonitz on Austria’s Steyr river is designed for a water flow of 10m3/sec and has an output of 700kW.

The trials are to last for five years and are the result of collaboration between VA Tech and Energie AG, which also took part in earlier tests of the Hydromatrix turbine at Agonitz.

In a separate announcement, VA Tech has been awarded a turnkey contract worth US$17M for the refurbishment of Scottish and Southern Energy’s (SSE) 24MW Culligran hydro power plant in Scotland.

The contract has been awarded to VA Tech Hydro and Weir Engineering Services Alliance, which are to fit a new 2MW Francis runner, generator and new main inlet valve at the facility’s unit 1. The work is also to include the installation of a new 17.3MW Deriaz runner, main inlet valve, hydraulic and digital governor, a brushless excitation system and new generator auxiliaries at unit 2.

In addition, the facility is to receive new control, protection and excitation systems, AC and DC electrics, pipe work and substation refurbishments.

The contract is the latest in an SSE programme valued at over US$420M to improve the efficiency of its hydro power facilities.

Culligran is expected to be back in operation in September 2005.