Secretary of State for Scotland Alistair Darling has officially opened Scottish and Southern Energy's new hydroelectric power station at Kingairloch on the Ardgour peninsula in Inverness-shire. 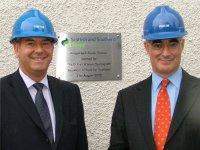 Amalgamated Construction (AMCO) were the design and build contractor for the Kingairloch power station, a 3.5MW conventional scheme situated on the Abhainn na Coinnich, at Kingairloch. The scheme, which is controlled remotely from Scottish and Southern Energy’s (SSE) headquarters in Perth, generates enough electricity to supply over 9000 households.

Water for the scheme is stored in Loch Uisge, which was raised by 3m by the construction of a new dam. The diversion of the adjacent B8043, which was required as a result of the larger impounded area, has been welcomed locally as the original road had been liable to flooding.

Other environmental considerations at the power station include the construction of a fish pass on Loch Uisge, the regeneration of native woodland, the provision of tourist parking alongside the reservoir and footpath improvements. To complement its beautiful surroundings, the power station is designed to be similar in style to local estate buildings.

Speaking at the opening ceremony on 31 August, Mr Darling, pictured opposite with SSE Chairman Sir Robert Smith, said: ‘Kingairloch power station is one of the largest conventional hydro schemes to be built in the UK for many years and is an important step in the Government’s drive to increase the proportion of energy generated from renewable sources.

‘A range of technologies are being harnessed in the switch to cleaner, greener energy. Hydro has a long and distinguished history in the Highlands and will have a key role to play in meeting future energy needs,’ he continued.

‘Kingairloch is also an excellent example of how effective and sustainable use of local resources can deliver real benefits for the community; in this case better transport links, environmental improvements and facilities to help boost tourism and support the rural economy.’

Sir Robert Smith added: ‘The opening of this site is another step towards achieving our target of having around 1,000MW of generation capacity qualifying for Renewables Obligation Certificates by 2008.’

Click on the link below to read a feature on the project.