The Queen goes green as planning permission is granted to build a low head hydro scheme on the River Thames. John Assheton reports on the project which will power a third of Windsor Castle 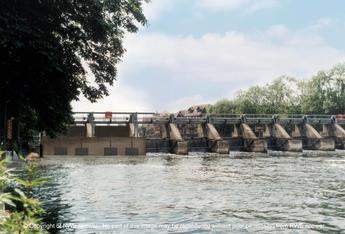 THE stretch of the River Thames flowing close to Windsor and Eton, in Berkshire,UK, has seen much hydro power over the last 130 years. Water powered pumping stations located on the banks of the river have, until recently, been successfully harnessing the power of the Thames. The Tangier Mill pumping station and Romney Lock pumping station have now been silent for the last three decades, with the Tangier Mill superceded by electric pumps. However, hydro power looks set to once again recapture energy flowing down this river, with a new proposal that will see hydro turbines built into the existing water level control structure – RomneyWeir – spanning the entire width of the main channel.

The Romney Weir hydro scheme will utilise just two of the ten existing weir bays and have little effect on current weir operation. The project is likely to comprise of up to four submerged propeller turbines, with a maximum output of 200kW and cost in the region of £1M (US$1.8M) to build. Even though the head across the weir is just 2m, the scheme is able to achieve its respectable power output by making use of the large flows present in the Thames. Around 20% of the annual flow of the river will be directed through the hydro scheme, which will use a maximum intake flow of about 14m3. The scheme is predicted to generate around 1.2GWh/yr and will operate as often as the flow in the Thames and the head across the weir allow; this results in the system having a load factor of around 70%. Power generated by the scheme will be equivalent to the annual electrical demand of around 250 households, but in this case all of the energy will be supplied and sold directly to Windsor Castle. A 400m underground cable will link the scheme to the castle removing any need for connection into the local electricity distribution grid. The proposal is expected to provide around a third of the castle’s annual electrical demand.

The original inspiration for the project came from the Royal household who continue to actively introduce and maintain energy efficient practices. Buckingham Palace in particular now makes use of energy efficient light bulbs and liquid petroleum gas powered cars, whilst recycling most of their green waste and using a bore hole water air conditioning system. Windsor Castle itself already has a combined heat and power unit installed.

The hydro scheme is being designed and developed by the UK based company npower renewables, part of the RWE utility group, who will also provide the financing for the project, manage the construction and operate the scheme for up to 40 years.

The Romney weir scheme was first proposed during the 1990s and has been developed through a number of hydro specialists including IT Power, Derwent Hydro, and npower renewables (formerly Innogy Hydro). Outline planning consent was granted for the scheme back in February 2004, for a design based around a power house building (Figure 1). However, local residents raised concerns regarding the visual impact and noise disturbance of this proposal, which when coupled with high civil costs for the power house construction, led to a fundamental rethink of the project. At this stage the external appearance of the scheme was yet to be submitted to the planning authority and this provided the ideal opportunity to work on a redesign.

An innovative new design evolved, making use of multiple smaller turbines in each bay. The size of these machines enables them to be installed submerged under the water line and onto the existing weir apron, almost completely removing the need for civil works and cofferdamming during construction. Figure 2 shows a photomontage of what the site could now look like on completion. The low profile character of this design was welcomed by local residents along with the news that the submersion of all moving parts under water should result in a much quieter scheme operation.

Civil work for the scheme is now likely to be limited to wing wall extensions and construction of an end wall to hold the turbines in place. The scheme allows the upstream water level to flow further through the weir to the new end wall before descending through the turbines to the downstream water level. Figure 3 provides a simplified schematic showing a cut-away layout of the scheme. It is hoped that the existing weir gates involved can be left in place and will be raised during operation. These gates can then be lowered for use as an upstream barrier during construction and whenever dewatering is necessary during maintenance.

Romney weir spans the river between two islands so there is no road access to either side. During construction and maintenance, workmen will have access by foot over the island paths, but all equipment and machinery must be brought to the site by barge. In order to get the best access to each weir bay, barges will bring loads directly upto the weir from downstream. There is some concern over river depth on this stretch, but recent depth soundings suggest that only minimal dredging will be required in order to make the section navigable. If necessary the next weir downstream could also provide the facility needed to raise the river level by temporarily closing weir gates. Redesign of the scheme to one of lower profile and removal for the need of a power house has drastically reduced the expected construction time. It is hoped that actual in-river works could now be completed within an estimated eight-week period.

The site itself will be leased from the Environment Agency (EA) who own and operate the weir. The lease will last up to 40 years from project commissioning, with the entire asset being handed over to EA after this period. The scheme is expected to take over 10 years to payback, but should have an operational life well in excess of the lease length.

The scheme is expected to have particularly low impact on both the weir and the surrounding area. However, as with all new development work, there were a number of key issues raised by a variety of stakeholders. These included issues regarding river navigation, flood control and local ecology, as well as visual impact, noise and disturbance during construction.

The project will operate in a way to ensure that both boat navigation and water sports activities will remain completely unaffected. The proposed turbines alter only the route to which water will travel through the weir and at no point is any water abstracted out of the Thames. It therefore follows that there is no effect to either upstream or downstream water levels. The scheme is also designed with failsafes in mind, so during an emergency at low flow either the turbine control valves or the weir gates could be gravity closed to shut the turbines down. The risk of not being able to close off each of these two weir bays is less than the risk of any one of the existing weir gates failing in the open position. Pillars, cross-chains and grill screens will also be in place to increase the safety of the turbine area, preventing water users from getting close to the turbine chamber.

Operation of the scheme will also have no effect on the ability of Romney weir to control flood flows. During periods of high flow, the gates of the weir are raised to let as much water through as possible. This prevents the weir becoming a water bottleneck and reduces any risk of flooding upstream. Romney weir is operated on a day to day basis by the Romney lock keeper who keeps detailed records of water levels and gate opening. Analysis of these records showed that during higher flow events the weir itself actually becomes flooded or drowned, that is, the upstream and downstream levels become the same. This occurs when only six and a half gates are open. Clearly once the weir is flooded, the upstream water level can never be lowered below that of the downstream level and opening more gates could have no effect on water flow. When this occurs, water flow is outside the control of Romney weir and water levels continue to back up from the next weir downstream. It can be concluded then that making use of two ‘spare’ weir bays will have no effect on weir operation during periods of high flow.

Local ecology in the river ecosystem also required careful consideration during the design of the scheme. Fish and other wildlife will be protected from entering each turbine by screens placed both upstream and downstream. In particular the upstream screen has been designed in consultation with EA to achieve a compromise between two crucial principles. Firstly that the spacing between each vertical bar adequately guards various types of fish against damage from the turbine blades. Secondly that the gaps between the bars provide enough space to allow the desired flow rate to enter the turbines. An acceptable flow velocity is important to ensure that fish do not become trapped against the screen. The upstream screen will also be fitted with an automatic cleaner to periodically remove any collected trash up over the turbines and back into the river to continue its downstream course.

Having dealt with these important issues, reserve matters for the new proposal were put before the planning committee of the Royal Borough of Windsor and Maidenhead local council. The application was successful and consent was granted on 25 July 2005.

Now that this scheme has been given full planning consent, the other aspects of the project continue to move forward. At the time of writing npower renewables was advertising for expressions of interest from companies around Europe with a view to go out to tender for the project during Autumn 2005. Assuming suitable construction contracts can be negotiated, it is hoped that the hydro scheme will be completed and providing green electricity to the castle before the end of 2006.