New way of getting your bearings 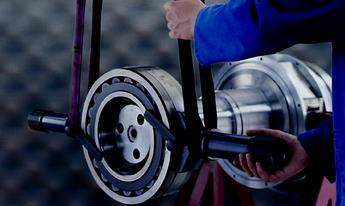 SKF has introduced a new concept in bearing handling tools with the latest offering in its TMMH series called, more straightforwardly than inventively, Bearing Handling Tool. The tool seeks to sidestep a common problem in maintenance work, that of safely moving large bearings from their packaging to the receiving shaft, a task that carries the additional difficulty of rotating the bearing through 90° during handling.

The company’s solution is to adapt the traditional sling, always likely to slip off while hanging from a hoist, by making a version in the form of a steel band that can be clamped around the bearing and slung from the hoist. It incorporates two handles that double as tightening screws and two anti-rotation plates that fix the inner ring and rolling elements to prevent them from swivelling.

Because it can withstand temperatures up to 160°C the tool can also be used in combination with an induction heater during preparation of the bearing for shaft mounting operations.