Contractor Services Group has won a US$3.6M contract to build a new fish barrier and weir as part of the Battle Creek Salmon and Steelhead Restoration Project in California, US. 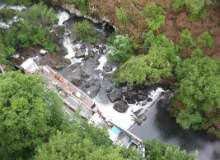 The contract, awarded by the US Bureau of Reclamation, is for the construction of a fish barrier and weir that will allow a constant 5ft3/sec of minimum flow in Baldwin Creek, downstream of the Darrah Springs State Trout Hatchery. The 5ft3/sec will provide the necessary flows for suitable salmon and steelhead habitat in the creek, while the barrier weir is to protect the hatchery from various pathogens that could be transmitted from infected anadromous fish. Construction is planned to be completed by year-end.
The work is possible after the Federal Energy Regulatory Commission amended Pacific Gas and Electric Company’s hydroelectric license to implement the work at the Baldwin Creek site.
“The key to success on such a complex issue as this restoration project is collaboration and cooperation at all levels," Reclamation Commissioner Michael L. Connor said. "Reclamation has worked diligently with local and national stakeholders and agencies to find ways to improve native fish habitat. This project will do that."
“With a record number of Spring Chinook Salmon returning to Battle Creek this year, further indicating the ongoing success of the Battle Creek Salmon and Steelhead Restoration Project, this construction project is necessary to provide for additional salmon habitat and to protect the valuable recreational trout fishery," added Mike Berry, Senior Environmental Scientist, California Department of Fish and Wildlife.
The restoration project is a proactive, cooperative effort to increase threatened and endangered Chinook salmon and Central Valley steelhead trout populations by restoring approximately 42 miles of habitat in Battle Creek and an additional six miles of habitat in its tributaries, while maintaining renewable energy production at the Battle Creek Hydroelectric Project, owned and operated by PG&E. Restoration is being accomplished primarily through the removal of five diversion dams, placement of screens and ladders on three other diversion dams and increasing instream flows.
Wildcat Diversion Dam has been removed and fish screens and ladders have been constructed at North Battle Creek Feeder and Eagle Canyon Diversion Dams on North Fork Battle Creek and, on South Fork Battle Creek, an Inskip Powerhouse bypass and tailrace connector to Coleman Canal has been installed (to prevent mixing North Fork and South Fork waters). The remainder of the project includes the construction of a fish screen and ladder on Inskip Diversion Dam, construction of a tailrace connector from South Powerhouse to Inskip Canal, and the removal of Lower Ripley Creek Feeder, Soap Creek Feeder, and South and Coleman Diversion Dams. This construction is anticipated to begin in 2014.