Macfarlane wins her own five-year term at NRC

The part-term replacement of former chairman Gregory Jazcko has been appointed for a full term as chairman of the US nuclear regulator. 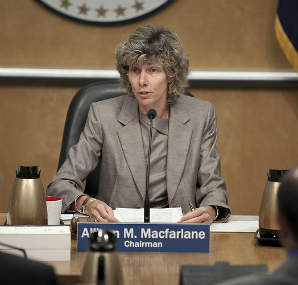 The part-term replacement of former chairman Gregory Jazcko has been appointed for a full term as chairman of the US nuclear regulator.

The US Senate confirmed her unanimously, and President Barack Obama had said that he would reappoint her.

In its note of congratulations, US trade group the Nuclear Energy Institute said:

"We look forward to continuing to engage with Chairman Macfarlane and her fellow commissioners to ensure that industry and agency resources are properly focused on those matters most important to the safety of commercial nuclear energy facilities."

It added: "With new reactors being built domestically, operating license extensions under review, post-Fukushima safety enhancements being implemented, and license applications for small reactors on the horizon, this is a challenging and exciting time in the U.S. nuclear energy sector. A common challenge for our facilities and the NRC is ensuring that regulatory requirements focus on those matters of the highest safety significance."

It also said: "Over the past year Chairman Macfarlane has done an outstanding job of restoring collegiality within the commission and demonstrating respect for differing opinions to allow the agency to fully focus on fulfilling its safety mission. The credibility of the NRC is immensely important to us, as well as to the global nuclear energy community, given the agency’s stature worldwide."