On 19 and 20 June 2013, the governing body of the ITER Organization to build and operate a fusion reactor convened in Tokyo, Japan. This two-day meeting brought together senior representatives from all the seven ITER Members— China, the European Union, India, Japan, Korea, Russia and the United States—under the chairmanship of Hideyuki Takatsu (Japan). 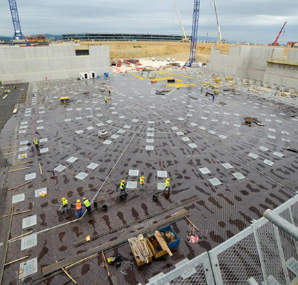 On 19 and 20 June 2013, the governing body of the ITER Organization to build and operate a fusion reactor convened in Tokyo, Japan. This two-day meeting brought together senior representatives from all the seven ITER Members — China, the European Union, India, Japan, Korea, Russia and the United States — under the chairmanship of Hideyuki Takatsu (Japan).

The ITER Council was pleased to take note of the progress in the on-site construction of the ITER scientific facilities and in the manufacturing of its components. Thanks to major contracts placed recently, construction of the main Tokamak Complex has begun.

The ITER project is transitioning to full construction. The Council noted the increasing pace of construction activities at the ITER site in Saint-Paul-lez-Durance, France and good progress in the manufacturing of Tokamak components and supporting systems, currently underway in all the ITER Members. Major contracts have been placed recently and many leading industries are now involved in the project; the first delivery of large components is expected on site in the third quarter of 2014.

The Council welcomed improved collaboration between the ITER Organization and the Domestic Agencies as part of the Unique ITER team, created to improve project execution with a goal to achieving schedule acceleration. Through close collaboration, solutions are being sought to improve schedule performance on the manufacturing of the systems and components required for First Plasma, including close collaboration with industry that has already resulted in the recovery of some delay. The ITER Council reaffirmed the importance of sustained efforts regarding schedule implementation, while recognizing the challenges due to the first-of-a-kind nature of ITER.

Significant progress was reported in the manufacturing of ITER magnets. More than 420 tons of niobium-tin strand (Nb3Sn) for the toroidal field conductors has now been produced by the six procuring Members, representing 90 percent of project needs. Also, 133 tons of niobium-titanium (NbTi) strand for the poloidal field conductors (51 percent of project needs) has been produced by China, Europe and the Russian Federation.

The Council approved the appointment of Bill Madia (US) as the 2013 Management Assessor.

A special meeting with representation at Ministerial-level will take place on 6 September 2013 at ITER Headquarters in Saint-Paul-lez-Durance, allowing the progress in construction of this vast international collaboration for fusion to be witnessed first-hand by all Members.
<hr>
Picture: 80% of the propping & shoring towers were installed as of May 2013