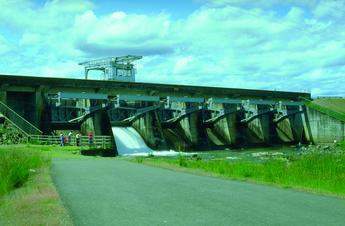 USACE begun the annual draw down of Fern Ridge Dam three weeks ahead of schedule due to the high amount of sediment coming out of the dam’s drains. Officials are concerned because sediment levels draining out of the dam are more than ten-times higher than they were last month.

Daily amounts of sediment released from the drain known at Station 45 averaged six-tenths of a pound in August and September, compared with three-tenths in May, June and July. USACE believes the cause of the sediment leakage is due to damaged drainpipes installed more than 60 years ago when the dam was built.

In January this year, following inspection of the internal drain system with a remote video camera, USACE found the dam to be in a safe condition. Prior to the January inspections, engineers had proposed operating the reservoir at 0.8m below full pool due to internal erosion concerns.

Construction of the Fern Ridge dam was completed in 1942. The dam is an earthfill structure with a gated concrete spillway to regulate reservoir levels. It is about 7.2km long and about 13.7m high.