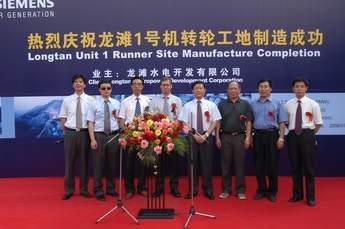 The runner, which was handed over in an official ceremony, is the first of five Francis runners manufactured by Voith Siemens Hydro Shanghai, who – in a consortium with Chinese manufacturer Dongfang – are responsible for the supply of seven 715MW Francis machines.