The first load has arrived at the site of the ITER international experimental fusion reactor in southern France, after a 38-day trip from China. 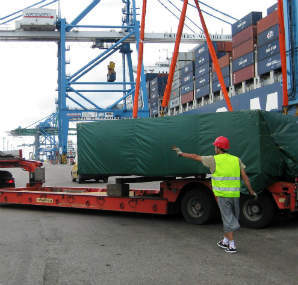 The first load has arrived at the site of the ITER international experimental fusion reactor in southern France, after a 38-day trip from China.

On 3 June, 14.5 tons of copper conductor produced by the Institute of Plasma Physics (ASIPP) in Hefei, arrived at the ITER construction site.

The spooled copper left Shanghai, China, in three large wooden boxes on 25 April, and moored at the docks in Fos-sur Mer late on Friday 31 May. On Monday 3 June, it made its way from the docks to the ITER construction site, where it arrived six hours later.

"This is only a small load," said the head of ITER’s Magnet Division Neil Mitchell, "but we expect that it is the start of an avalanche of deliveries to the ITER site now that the production around the world is building up."

Despite being a dummy component, the transport crates were equipped with several monitoring devices to record movement and accelerations throughout the journey, ITER said. Other systems monitored the pressure inside the conductors, which are filled with pressurized inert gas, to confirm that there was no contamination by damp or salt.

As well as being the first delivery, the load was also the first ITER item to enter the large on-site winding facility, where it is being stored until testing begins.