The first breakthrough has been made at Iceland's Kárahnjúkar hydroelectric project, as the main boring team finished the 14.6km section of the headrace tunnel. 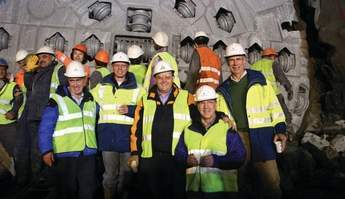 All three of the project’s TBMs (tunnel borings machines) have experienced heavily fractured ground and water inflows into their sections of the headrace tunnel but, despite this, the TBMs are on schedule and the Robbins main beam TBM (TBM 1) finished its bore on time, averaging 643m per month in 2006. The TBM emerged with very minimal machine wear even after boring through hard basalt, moberg, and pillow lava geology of up to 300MPa (44,000 psi) UCS.

The 7.23m diameter TBM 2 is scheduled to finish boring its 11.1km long section of tunnel at the end of September. Once boring is complete, the machine will be transported and reassembled to begin boring an 8.7km long section of the Jökulsá diversion tunnel in the first quarter of 2007. The tunnel, to be finished in 2008, will add to the water supply capacity of the power house by connecting the Ufsarlón reservoir to the main headrace tunnel.

The Kárahnjúkar hydroelectric project includes 73km of tunnels that will transfer water to a power house in the Fljótsdalur valley. Project owner Landsvirkjun contracted Impregilo to construct the power scheme, which will generate 690MW annually for the Alcoa aluminum smelting plant.

The Robbins Main Beam TBM (TBM 1) finished boring on the same day (9 September) that a second Robbins TBM (TBM 2) tied a world record in the 7 to 8m diameter range, the machine boring 92m in 24 hours. Another Robbins machine achieved this same feat on the Epping to Chatswood rail tunnels in Sydney, Australia in 2005.