The McClean Lake mill has started producing uranium concentrate from ore mined at the Cigar Lake operation in northern Saskatchewan. 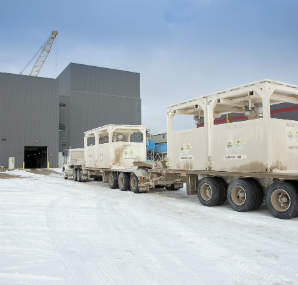 The McClean Lake mill has started producing uranium concentrate from ore mined at the Cigar Lake operation in northern Saskatchewan.

The McClean Lake mill, operated by AREVA Resources Canada Inc., recently completed modifications required to safely process the high-grade ore from the Cigar Lake mine. AREVA says that the mill is the only facility in the world designed to process high-grade uranium ore without dilution. Cigar Lake ore is transported by truck to the McClean Lake mill located 70 kilometres northeast of the minesite for processing.

Mining at Cigar Lake began in March 2014. To date, Cameco has delivered about 1,400 tonnes of ore to McClean Lake. Mining was suspended in July 2014 to allow the orebody to freeze more thoroughly. Mining resumed in the first week of September and ore deliveries to the mill are ongoing. The mill is expected to produce up to 1 million pounds of uranium concentrate from Cigar Lake ore in 2014 and ramp up to its full production rate of 18 million pounds by 2018, making it one of the world’s largest uranium production centres.

Cigar Lake is among the world’s richest and most technically challenging orebodies and I congratulate all of the people who helped to bring it into production," said Cameco president and CEO Tim Gitzel. "It provides Cameco with a large-scale, low-cost production centre and positions us to take full advantage of the long-term growth we see coming in our industry."

As of December 31, 2013, the total capital cost of the Cigar Lake project was estimated at $2.6 billion, according to Cameco. Up to 1000 people worked at the site during construction and the mine will employ more than 600 highly-skilled workers during operation. The majority of the workers are residents of northern Saskatchewan.