Brascan Power New York has completed a US$920,000 restoration project at its 5.4MW Kamargo hydroelectric facility on the Black river in Jefferson County, New York, US. 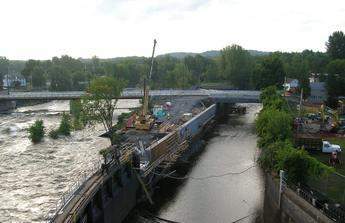 ‘The three-month long construction and restoration project at the Kamargo site focused primarily on the power house foundation wall and the north canal wall. Both were built in 1921, and have survived many harsh, upstate New York winters,’ said Jon Elmer, Lake Ontario region general manager. ‘In order to complete the work on the north canal wall, we needed to drain the canal and cease generation during an eight-week period. I am pleased to be able to return this renewable energy source to the grid for winter production.’

Brascan Power restored the power house walls to original strength by removing most of the existing concrete and replacing it with a thicker layer of reinforced concrete.

The 70m long, 4.6m high and 2.4m wide north canal wall is the riverside wall of the hydro plant’s canal that channels approximately 85m3/sec of water from the Black river into the power house for the turbines. Brascan Power removed and completely rebuilt with reinforced concrete all of the buttresses, and the top of the wall along two-thirds of the wall’s length. The company also increased the width of the remaining one-third of the wall for greater stability.

Work performed at the Kamargo site is one of many improvement projects planned by Brascan Power over the next decade that are intended to modernise its New York State hydro power fleet.