Alstom has begun transportation of approximately 2,500 pieces of equipment to 2400MW Ituango hydroelectric project, in Colombia. 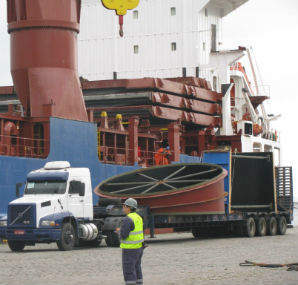 Alstom has begun transportation of approximately 2,500 pieces of equipment to 2400MW Ituango hydroelectric project, in Colombia.

The pieces – all components of the first four generators units of the project – were produced at the company’s unit in Taubaté, Brazil. They include large and small-sized equipment, comprising Draft Tubes and its concrete elements, Spiral case, Generator parts, tools, special devices and miscellaneous. Transportation will be made by ground, using 95 trucks, and by sea, with parts expected to arrive in Colombia in mid-September.

"The production of the equipment for Ituango is at full throttle. We are proud to conclude, with success and excellence, another important milestone in hydro generation projects in the continent" says Januário Dolores, Alstom’s General Director for Hydro Generation Business in Latin America. "Although it is a long and complex logistic, since it involves terrestrial and maritime transportation, Alstom and its partners are working hard to conclude another important delivery", he adds.

In October, Alstom expects to ship another 244 pieces of equipment, including Spiral Case and Stator supports, which will be shipped in 18 trucks and which are also part of the first units. The first four generator units are expected to start operating in 2018, and the other ones by 2021.

Alstom signed in 2012 a contract worth approximately € 170 million with Empresas Públicas de Medellín (EPM) to supply eight 300MW Francis turbines and Generators for the Ituango hydro plant. Installed in Cauca River, located in Antioquia, 170 km away from Medellín, the plant will be considered the largest in Colombia when it is in full operation.