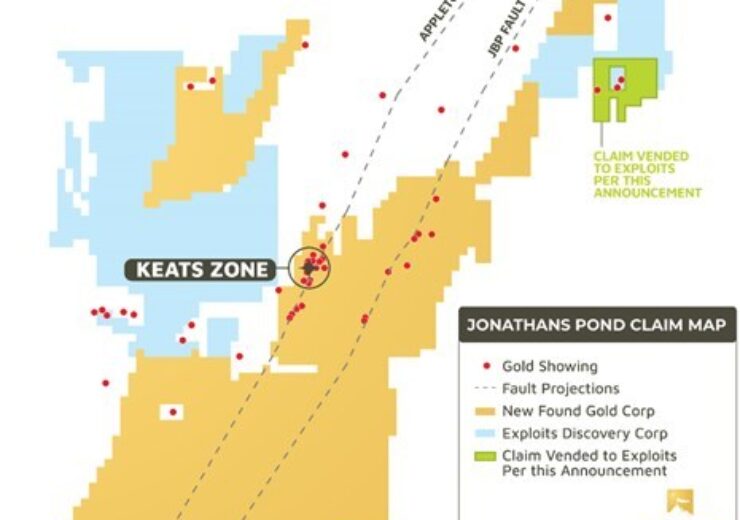 New Found Gold is pleased to announce that it has entered into a purchase and sale agreement with Exploits Discovery providing for the sale by New Found to Exploits of a 100% interest in two mineral claims representing approximately 12.0 km² of land. The primary claim is Jonathan’s Pond (11.25 km2, shown in Figure 1 below), and the second is a 75 Ha claim on Glover Island 210 km to the west of the Queensway project. As consideration for the purchase of the Mineral Claims, Exploits will issue to New Found 6,562,799 common shares in the capital of Exploits and New Found will also retain a 2% net smelter returns royalty on production from the Mineral Claims.

Pursuant to the terms of the Agreement, New Found has agreed not to transfer or dispose of the Consideration Shares for a period of one year following the closing date of the Transaction, other than in the event of a change of control of Exploits. Upon completion of the Transaction, New Found will own approximately 9.9% of the issued and outstanding Exploits Shares.

Stated Collin Kettell, Executive Chairman of New Found, “We are pleased to partner with Exploits on the Jonathan’s Pond project. Consolidating the Johnathan’s Pond area into a contiguous claim package will facilitate efficient exploration in this area. While New Found is primarily focused on high-grade gold targets along the Appleton and JPB fault structures to the west of this project and in a different geological setting, Jonathan’s Pond does exhibit high-grade gold at surface. In exchange for these claims New Found is receiving share consideration of approximately $4.8 million (based on Exploit’s closing share price on December 10), and our resulting approximately 9.9% ownership of Exploits will provide exposure for New Found to the large land package that Exploits has acquired in Central Newfoundland.”

To date New Found has completed approximately 11,900 m of core drilling at Queensway North, including 36 holes at the Keats Zone target. The Company has now moved into its new 7,000 ft2 core-logging facility which has capacity for a significant expansion of the drill program should a decision be made to do so.

As previously noted, selected assay intervals are forwarded to the assay lab on a rush basis and a whole sample metallic screen assay method is specified by New Found when samples contain notable mineralization, visible gold, or at the lab when any samples return initial fire assay values greater than 1.0 g/t Au. The lab has the capacity to process a total of approximately 60 metallic screens per day. New Found has several thousand samples now awaiting or undergoing metallic screening resulting in significant backlog and time delay including for the drill intervals submitted on a rush basis.  The Company anticipates receiving and reporting additional results from step out holes around NFGC-19-01 in the coming two weeks, as well as from the Little-Powerline and Lotto Zones. Initial intervals from other holes including those drilled on grid line 4850N (50 m north of NFGC-19-01) that were submitted on a rush basis are anticipated in early January 2021.