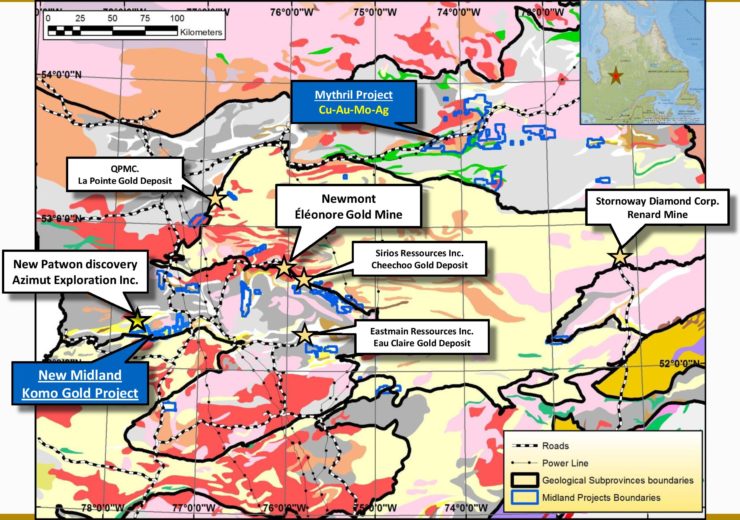 Midland Exploration has acquired the 100% interest in Komo project located near the recent Patwon gold discovery made by Azimut Exploration on its Elmer project, near James Bay, Quebec.

The Komo project covers 199km2 area and has a strong gold potential, with a total of 383 claims. The western part of the project is approximately 7km away from the south of the Azimut discovery.

The project covers approximately 40km of the volcanic belt that hosts the Patwon discovery, and approximately 30km of the highly prospective contact between the La Grande and Opinaca/Nemiscau geological subprovinces.

The contact is said to host most of the gold deposits located in the James Bay region, namely the Eleonore mine in Newmont and the La Pointe and Cheechoo deposits.

Midland said that the part of the project close to the Patwon discovery exhibits a structural setting highly favourable for gold, with a folded gabbro unit located in the pressure shadow of a large-scale intrusion.

In addition, the historical molybdenum-copper occurrence also underlines the potential for porphyry-type mineralization on the Komo project.

Midland stated: “The project will be the focus of a geological compilation during the next few weeks prior to defining an exploration program for the coming year.”

In December last year, Midland announced that it would resume exploration of its wholly-owned (100% Midland) Mythril and Mythril regional projects in the next few weeks.