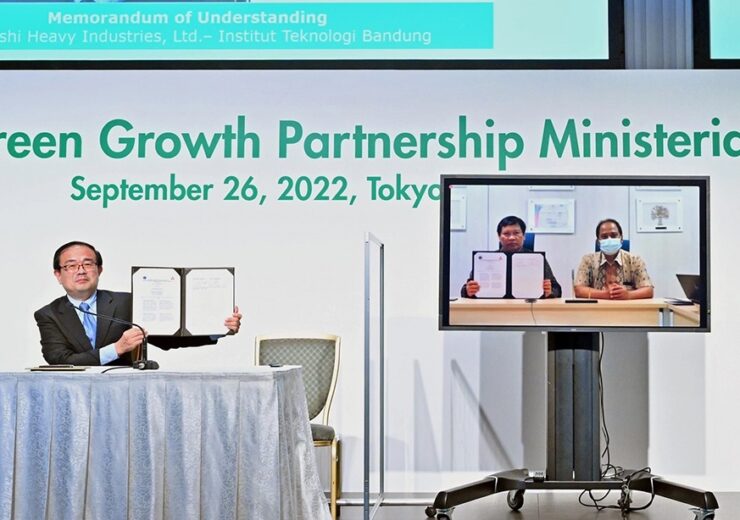 In 2020, MHI and ITB concluded a memorandum of understanding (MOU) for joint research on next-generation clean energy solutions and analysis of big data relating to power plants. In February 2022, the two partners agreed to a five-year extension of the MOU, continuing the collaboration to develop technologies that will accelerate decarbonization in Indonesia. Now, under the same MOU, joint R&D on ammonia-fired power generation will be conducted using facilities at ITB, with three overarching aims: to promote technology development between Japan and Indonesia; to foster technological and personnel exchanges with ITB’s educators and research team members; and to advance the adoption of clean energies in Indonesia.

A signing ceremony for the new agreement took place in Tokyo on September 26 at the 2nd Asia Green Growth Partnership Ministerial Meeting (AGGPM), which was held under the auspices of Japan’s Ministry of Economy, Trade and Industry (METI). ITB Vice Rector, Prof. I Gede Wenten, shared his thoughts on the new cooperative undertaking: “The energy transition plays an important role in reducing global greenhouse gas emissions, and in the long term, will affect the reduction of global warming or climate change. This research collaboration between ITB and MHI focuses on the use of NH3 in power generation, greater adoption of which will help reduce the use of coal. In the long term, production of NH3 will hopefully comprise more green NH3 that uses renewable energy. I hope this joint R&D will have a positive impact on efforts to make a sustainable energy transition.”

Junichiro Masada, Senior Fellow and Senior General Manager of MHI’s Energy Transition Division, expressed his positive expectations of the project: “By combining MHI’s extensive technological capabilities in power generation with ITB’s profound, highly specialized expertise and strong knowledge of conditions in Indonesia, I am confident that truly innovative research in clean energy technologies will result from this collaboration. Working closely with ITB will surely give rise to new ideas and drive the energy transition in Indonesia forward.”

Under the 2020 MOU targeting decarbonization of Indonesia’s energy sector concluded between MHI and ITB, an institution that has produced numerous distinguished members of Indonesia’s governmental, academic and financial realms, joint feasibility studies have been performed not only on emerging energy sources such as hydrogen and ammonia, but also on air quality control systems (AQCS) and microgrid solutions. To train engineers who will contribute to Indonesia’s future, MHI and ITB have also conducted joint lectures on topics ranging from big data analysis to biomass energy, integrated coal gasification combined cycle (IGCC) systems, hydrogen usage and AQCS development.

The newly concluded MOU comes at a time when Indonesia is ramping up efforts to decarbonize its energy sector, demonstrated by its officially announced commitments to achieve 23% renewable energy use by 2025 and reduce the nation’s greenhouse gas emissions by 29% by 2030. Going forward, MHI, with support from its power solutions brand, Mitsubishi Power, looks to make further contributions to Indonesia’s scientific and technological development, as well as to stabilization of its power supplies and protection of its environment.