floating solar plant on the Cirata Reservoir and the country plans to add another 60 floating plants, to save its precious land resources 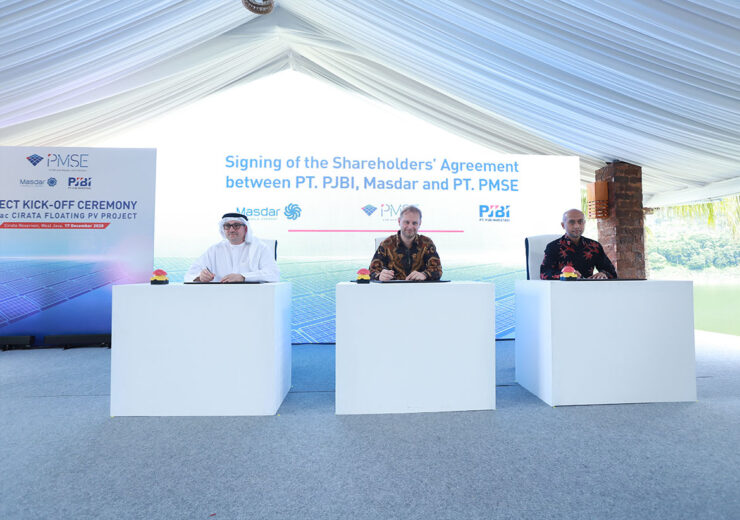 Masdar Clean Energy (Masdar), a United Arab Emirates-based clean energy company, has formed a joint venture with PT PJBI for the development of the first floating solar plant in Indonesia, with 145MW capacity.

PT PJBI is a subsidiary of PT PLN (Persero), Indonesia’s state electricity company. The joint venture was formally announced at a ceremony at the Cirata reservoir, where the project will be located.

The floating solar project is considered to be the largest of its kind in Southeast Asia and also one of the largest in the world, whose construction is expected to begin early next year.

The project was also designated as a National Strategic Project (PSN) by the Indonesian government, giving it priority status and recognising the economic and social benefits that it can bring to the nation.

Masdar CEO Mohamed Jameel Al Ramahi said: “The creation of this joint venture company, PMSE, will enable us to continue the exceptional progress we have made on the Cirata Floating Photovoltaic Power Plant with our development partner PT PJBI.

“This project marks our entry into Southeast Asia, where we see tremendous potential, given the region’s rapid economic growth and commitment to sustainable development. It also demonstrates the continuing strong relationship enjoyed between the United Arab Emirates and Indonesia, and will support the transfer and exchange of knowledge between our two countries.

“Masdar looks forward to extend its successful collaboration and strategic partnership with PJBI and PLN to expand its presence and investments in Indonesia.”

The floating solar plant will be located on 250 hectare plot on the 6,200 hectare reservoir, generating enough clean energy to power about 50,000 homes.

The project is expected to offset 214,000 tonnes of carbon dioxide emissions. During the construction phase, it is anticipated to generate about 800 jobs.

PJBI President Director Gunawan Yudi said: “The development of the 145 MWac Cirata Floating PV is a big step for PJBI – a subsidiary of PJB – to develop a business and partnership as an electricity producer in Indonesia.

“Through our joint venture company PJBI with Masdar, we commit to contribute to the development of new renewable energy power plants. We hope this collaboration will be the first step in PJBI and Masdar’s cooperation in Indonesia and in the region.”

Indonesia is targeting to generate about 23% of its energy from renewables by 2025 under its Electricity Infrastructure Acceleration Program.

The Government is planning to develop another 60 floating solar plants, to capitalise the over 600 lakes and reservoirs and help preserve its precious land resources.