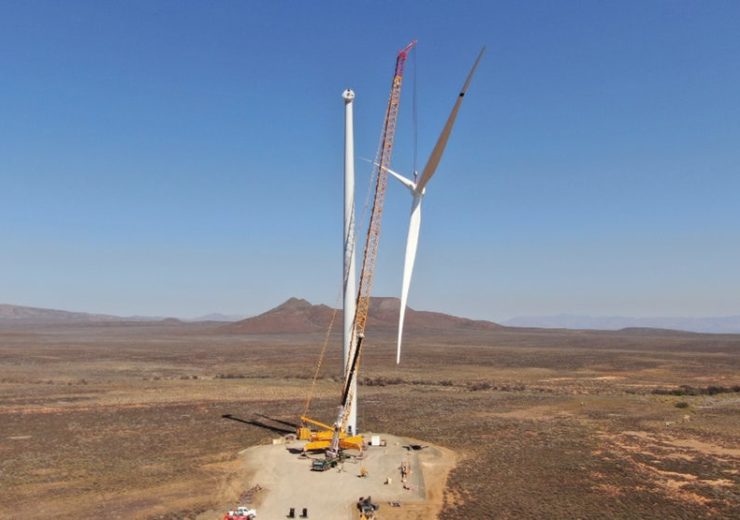 Perdekraal East has taken on the look of a wind farm almost overnight with the erection of its first turbine tower.

The latest milestone for the Western Cape project was also one largely undertaken with South African expertise.

Some 150 workers, the majority of those involved in the installation, are hired from the local communities of Ceres, Nduli, Bella Vista and Prince Alfred Hamlet, while others have been brought in from elsewhere in the country.

He said: “We are very proud that both specialist crane operators are South Africans, an indication that our industry is maturing and that skills are being effectively transferred.

“The first 100% local South African turbine lifting team featured during the latter part of Khobab Wind Farm’s construction in 2017, whereas prior to that we were required to import this expert skill.”

Each turbine takes about a day to put up – weather permitting. The first two tower sections and rotor are assembled during a five-hour pre-erection phase, with the installation of the remaining three tower sections, 86 tonne nacelle and rotor being completed within another seven hours.

Standing 115metres tall, with the fibreglass reinforced epoxy blades reaching a further 53.2metres into the sky, the first turbine to be erected made impressive addition to the landscape.

And by then six more were waiting to be lifted, keeping the project on target to enter commercial operation with our Africa Joint Venture, Lekela Power, in the first quarter of next year.

The next major construction milestone will be the arrival of the main transformer and completion of the on-site substation.

Loots admitted: “We are extremely pleased to be on schedule and on budget.”

The 110 MW Perdekraal East Wind Farm spans 3 055 hectares and will generate enough clean electricity to power up to 95,000 South African homes when it enters operation in early 2020. It will also eliminate approximately 410,000 tonnes of carbon emissions each year compared to traditional fossil fuel power plants.

Nabrawind to supply towers to Innovent for a windfarm in Namibia