Lukoil said that it has installed the topside of the wellhead platform at the Yury Korchagin field as part of the phase 2 development of the offshore Russian oil field in the Caspian Sea. 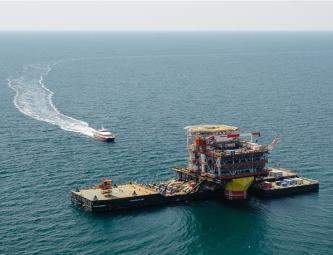 According to the Russian oil giant, the wellhead platform is a satellite platform that will enable drilling to initiate development of the reserves in the eastern part of the oil field. Drilling for the phase 2 development is anticipated to begin next month, said Lukoil.

In addition to the process equipment, the wellhead platform also houses the safety systems, accommodation quarters to facilitate temporary stay of personnel, and also a helideck.

Lukoil said that with a majority of operations of the phase 2 development being automated, it has decided to have only eight workspaces for the temporary accommodation of the personnel.

The company said that the oil and gas produced from Yury Korchagin phase 2 development will be transported via subsea pipelines to the host platform where they will be treated for exporting it onshore.

Contained in water depths between 11 and 13m, the Yuri Korchagin field became the first field to be commissioned by Lukoil in the Caspian Sea.

The first phase development of the offshore oil field saw an investment of RUB34.4bn ($1.12bn) to drill 30 wells, which included 26 production wells, one gas-injection well to go along with three water-injection wells.

In 2016, Lukoil initiated the phase 2 project to exploit the reserves in the eastern part of the Yuri Korchagin field with plans to construct the wellhead platform for drilling up to nine wells along with subsea pipelines and power cables to connect the iceresistant platform built during the phase 1 development.

Earlier this month, Lukoil commissioned the $3.4bn Kandym gas processing complex in Uzbekistan, which will have a yearly capacity of 8 billion cubic meters of gas.