Lukoil has completed drilling of the first production well from the wellhead platform at the Yury Korchagin field in the Russian waters of the Caspian Sea. 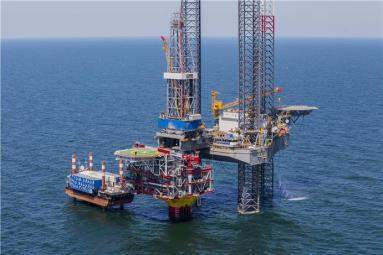 The Russian energy company said that the well was drilled within the second field development stage which is being undertaken to put the Eastern part of the Yury Korchagin field into production.

Lukoil revealed that the single-bore well with horizontal completion was drilled using a jack-up rig. While the measured depth of the production well is 5,217m, its reach is 4,235m.

The well’s initial flow rate has been reported by the Russian energy company to be nearly 500 tons of crude oil per day.

According to Lukoil, the use of a lower completion system with multi-position inflow control valves gives scope for the most efficient use of the production well’s potential.

Additionally, the company, under the additional drilling program and within the first field development stage, completed construction of a 1,408m sidetrack in the single-bore production well #14.

Lukoil believes that the upgraded well with isolated bores will make it possible to draw crude oil from the original bore and the sidetrack separately. This will increase the hydrocarbon recovery factor of the field, said the Russian firm.

Located 180km from Astrakhan and 240km from Makhachkala, the Yury Korchagin field is contained in a sea depth of 11–13m.

Discovered in 2000, the Yury Korchagin field is the first discovery of Lukoil in the North Caspian oil and gas province. The Russian offshore field entered into commercial production in 2010.

Development of the Yury Korchagin field is being done in two stages. The first stage features installation of a fixed offshore ice-resistant platform with a drilling facility and an offshore transshipment facility.

The second stage, on the other hand, will see installation of a wellhead platform, a multi-phase intra-field pipeline and power cable connections with the fixed offshore ice-resistant platform of the first stage.

Earlier this week, Lukoil said that it has reached a final investment decision (FID) on the Rakushechnoye field development project in the Caspian Sea. The Rakushechnoye field is believed to hold initial recoverable reserves of around 39 million tonnes of oil and gas condensate, and 33 billion cubic meters of gas.