Lukoil concludes contract for exploration on Zhenis block in Kazakhstan

PJSC LUKOIL, the Ministry of Energy of the Republic of Kazakhstan and JSC NC KazMunayGas have concluded a contract for the exploration and development of hydrocarbons on the Zhenis block in the Kazakh Sector of the Caspian Sea. 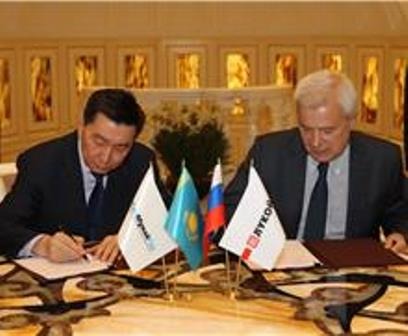 Image: The new project in the Caspian Sea is an important step in expanding the resource base in the region. Photo: Courtesy of LUKOIL.

Zhenis Operating (a fifty-fifty joint venture between LUKOIL and KazMunayGas) will be operator of the project.

In accordance with the concluded contract main minimal obligations include drilling of one exploration well and a 3D seismic survey.

​The new project in the Caspian Sea is an important step in expanding the resource base in the region which has a strategic importance for the Company and where it has accumulated considerable expertise.

Zhenis block is located in the southern part of the Kazakh Sector of the Caspian Sea. The distance to the shore is 80 kilometers, the nearest sea port is Aktau.

In 2018 LUKOIL and KazMunayGas concluded a Joint Operating Agreement and a Financing Agreement on the Zhenis project and in February 2019 the Ministry of Energy of the Republic of Kazakhstan issued mineral rights on the block.

LUKOIL has been operating successfully in Kazakhstan since 1995. The Company participates in the development of the Tengiz, Karachaganak and Kumkol fields, in a joint venture developing the Tsentralnoye field in the Caspian Sea as well as in the Caspian Pipeline Consortium.