With 560 beds the Johan Sverdrup living quarters topside is the largest of its kind in Norway. The fourth and last platform for the first phase of the giant project is now ready for sail-away from Kværner’s yard on Stord to the Johan Sverdrup field, where it will be installed in a single lift. 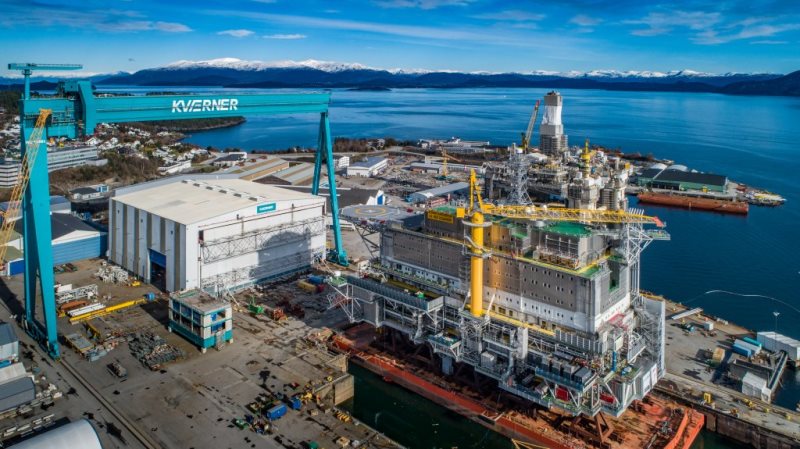 “This is an important day for Equinor, the Johan Sverdrup partnership and the Norwegian continental shelf (NCS). This is the last platform in the first phase of the project development, and the completion of the living quarters topside takes us one significant step closer to the start-up of Norway’s big source of income for the next 50 years,” says Arne Sigve Nylund, executive vice president for Development and Production Norway.

The Johan Sverdrup field – owned by license partners Equinor, Aker BP, Lundin Norway, Petoro and Total – is expected to provide value and revenue to the Norwegian state and society of more than NOK 900 billion over the field’s life.

On 15 February this year the joint venture formally handed over the topside to Equinor, just as planned more than 3 ½ years ago. One month later, after further preparations, the living quarters topside is now ready for sail-away to the Johan Sverdrup field in the North Sea where it will be transported on board the lifting vessel Pioneering Spirit.

“Kværner, KBR and Leirvik have delivered a high-quality platform on time and cost. As regards health, safety and environment, the project had a few incidents in the early phase. But the way our suppliers have turned this around has been commendable, so the overall results also in this area have been good,” says Trond Bokn, senior vice president for the Johan Sverdrup development.

“The platform’s high quality and degree of completion at the moment is vital to be able to start field production as planned in November this year,” says Bokn.

“This is perhaps the closest to a «plug-n-play» platform of this size we have ever seen, proving that the joint venture in collaboration with Leirvik have delivered an excellent product,” says Aud Hove, Equinor’s project manager for the utility and living quarters topside.

“This is also a result of the good collaboration and high quality in execution which the project has had since day one. We’ve met every milestone as originally planned, which is quite unique,” says Hove.

The high degree of completion has been achieved by, inter alia, use of the Pioneering Spirit lifting vessel. The vessel’s ground-breaking lifting technology enables completion and testing of bigger topsides onshore before they are installed in a single lift offshore. Carrying out the work onshore instead of offshore leads to major savings and reduced health, safety and environment risk.

The single-lift installation technology was introduced globally during the installation of the drilling platform on Johan Sverdrup last summer.

Now the vessel will be put to work again, first by lifting the 26,000-tonne processing platform for Johan Sverdrup which according to plan will occur in the next couple of days, before the vessel returns to Stord to pick up the 18,000-tonne living quarters topside.

At the Rosenberg WorleyParsons yard in Stavanger yesterday Equinor and the Johan Sverdrup partners celebrated that the two last bridges and the flare tower for the processing platform were ready for sail-away to the field.

With this, Johan Sverdrup is ready for installing the five last pieces constituting the first phase of the giant project puzzle.