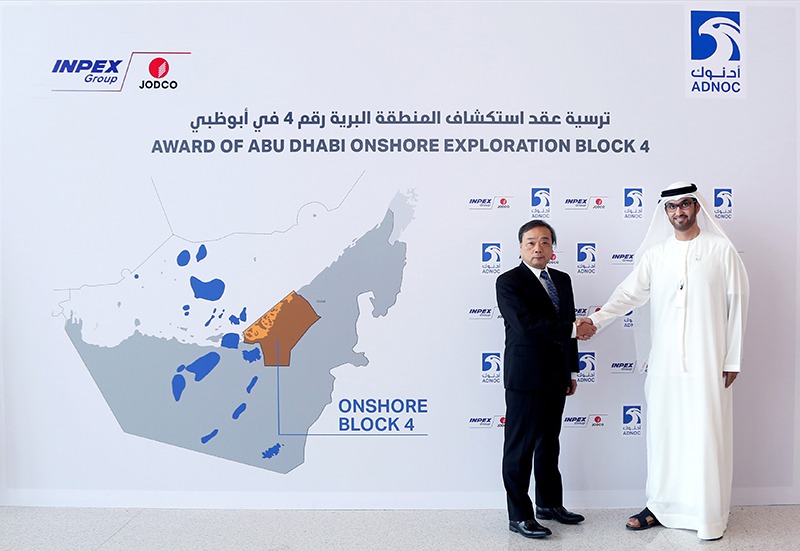 INPEX, which will have a 100% stake in the exploration phase of the Abu Dhabi onshore block, has committed to invest up to AED646m ($176m) as per the agreement signed with ADNOC. The investment covers the participation fee and also the costs needed for exploration for hydrocarbons in the block, and also for appraisal program.

The awarded block is located in a coastal area in the central part of Abu Dhabi emirate. It is spread over an area of nearly 6,116km2.

INPEX, after undertaking exploration work and appraisal of the existing discoveries in the block, will have the scope to develop and produce any commercial discoveries, said ADNOC. As per the agreement, which has a term of 35 years, the UAE state-owned company will have the option to own a 60% stake in the production phase of Onshore Block 4.

ADNOC Group CEO Sultan Ahmed Al Jaber said: “For over 40 years, INPEX, along with its subsidiary JODCO, has been a strategic partner to Abu Dhabi and ADNOC.

“Today’s agreement, following a competitive bid round, extends that long-standing partnership between one of the world’s leading oil and gas resource holding countries and the third largest global economy, and represents an attractive and strategic opportunity for both parties that will deliver mutual benefits.”

According to ADNOC, the awarded concession area contains two existing undeveloped oil and gas fields, named Ramhan and Hudairiat, which will both be appraised by INPEX.

The Abu Dhabi-based company also said that the proximity that Onshore Block 4 has with the onshore producing Al Dabb’iya and Rumaitha oil fields and also to the Umm Al Dalkh offshore field, indicates the potential it has. INPEX believes that the factors could help the potential commercial discoveries of oil and gas from the block to be brought into development and production earlier than otherwise.

INPEX president and CEO Takayuki Ueda said: “INPEX positions Abu Dhabi as one of its core business areas, and we look forward to working in close cooperation with ADNOC to help it unlock value from Abu Dhabi’s substantial hydrocarbon resources while further expanding and strengthening our own business portfolio.

“This agreement to explore and appraise oil and gas opportunities in a highly promising sector of Abu Dhabi underpins the importance of our ongoing partnership and the further strengthening of a decades-old and progressive business relationship between INPEX and ADNOC.”