Iberdrola advances towards zero emissions in Europe by 2030 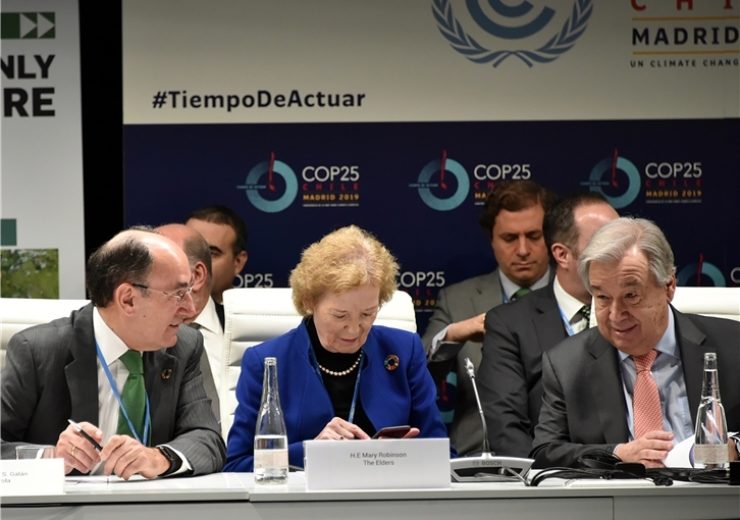 Image: Ignacio Galán, Chairman and CEO of Iberdrola discussed the company´s ambitions in his speech at the high-level event of Caring for Climate at COP25, with the Secretary General of the United Nations, Antonio Guterres. Photo: courtesy of Iberdrola, S.A.

Iberdrola’s Chairman and CEO, Ignacio Galán, stated today that the company will have virtually zero emissions in Europe by 2030 and maintained the commitment to achieve global emissions neutrality by 2050. The commitment was made to the Secretary General of the United Nations, Antonio Guterres, during his speech at the high-level meeting ‘Caring for Climate’, organized by the UN Global Compact at COP25.

During his participation in the panel ‘Our only future – the Role of the Private Sector in Reaching 1,5°C and Net-Zero’, Galán discussed the company’s strategy to support the transition to a low-carbon economy, which began 20 years ago.

As it stands today, Iberdrola’s emissions are a quarter of those of its European competitors. “Our commitment to renewable energy means we have already reached a level of zero emissions in many of the countries where we operate, such as the United Kingdom, Germany or Portugal,” explained Galán.

To reach this leadership position, Iberdrola has invested more than 100 billion dollars since 2001 in new renewable energy, smart grids and efficient storage and the company will continue to devote more than $10 billion per year to these activities. The investment has allowed the company to grow globally and become a world leader in wind power, network digitization and green finance.

Ignacio Galán stated that Iberdrola’s model shows that the transition to a green, low-carbon economy is a source of opportunities. He said: “We have supported transformation in intensive industries that were in decline, such as shipyards, and encouraged the launch of entirely new companies, like some of those working with us to deliver smart meters or components for photovoltaic plants or offshore wind farms.”

In this transition, the electricity sector, responsible for 25% of emissions, plays a key role: it is necessary to replace polluting technologies with renewable energy while promoting the electrification of other industries such as transport and heating.Galán also reiterated the need to take immediate action, in line with the ethos of COP25. “The energy transition is feasible. We have the necessary technology at an affordable cost, but we have little time. The time for action is now”, said Galán. He added: “As the European Commission says, this is an opportunity for an industrial renaissance, creating jobs and wellbeing for everyone”.