Subsea cable and connector specialist Hydro Group, alongside its French regional partner Wenex Equipements, has completed its scope of work on the SEM-REV marine renewable energy project in only seven months. 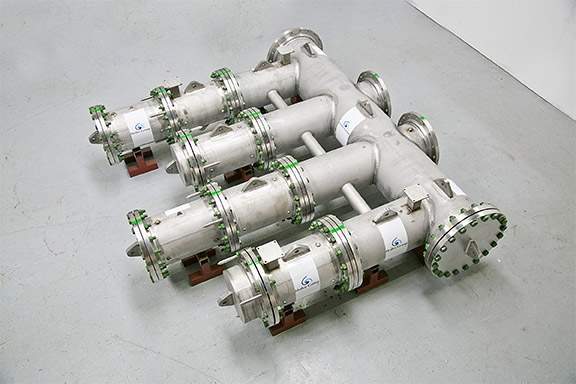 In 2015, the Franco-Scottish consortium won a £2.5million (€3.5million) contract to manufacture and install the array cabling infrastructure, 12 miles from the town of Le Croisic on the French Atlantic coast.

The Floatgen turbine is now fully operational. Its connection to the grid will enable the supply of electricity to 5,000 inhabitants.

The contract, led by Entreprise Travaux Publics de l’Ouest (ETPO) with the assistance of Hydro Group Plc and Wenex Equipements as sub-contractors, is already being acknowledged as the successful foundation of the French industrial offshore wind energy sector.

“A 24kV variant of our 36kV Hydro Renewable Connector (HRC) connects the device cable to the export cable, permitting three subsea three-phase electrical cables to be mated without compromising the circuit. In addition, a custom-built stainless steel PDH allowed flexible in-line connections without compromising reliability or ease of operation.

“Our PDH’s modular design greatly reduces carbon footprint and the dual water ingress protection along with the anti-corrosion properties of our technology will provide reliable sealing with a 20-year operational lifespan.”

The turbine is the first operational unit of the floating foundation concept patented by Ideol, built in concrete by Bouygues Travaux Publics.

Benoit d’Alançon, Director General of Wenex Equipements SA commented:“The successful completion of the SEM-REV project is of great importance to our Franco-Scottish collaboration.

“By working together, we have demonstrated the effectiveness of our technical partnership and created a solid foundation for future success.”