GFG Resources has entered into a purchase and sale agreement with Richmont Mines to acquire a stake of 100% in the Sewell Property in Ontario, Canada in an all-stock deal. 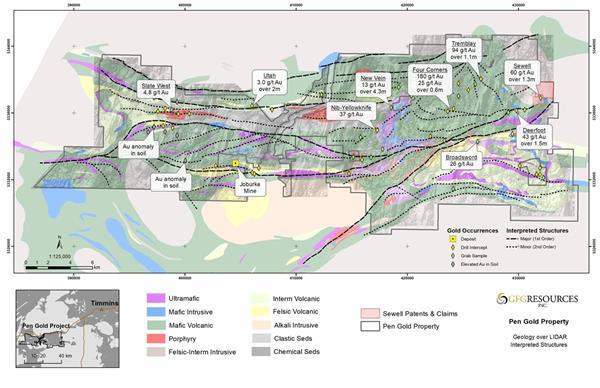 The Sewell Property is a land package, made up of one legacy claim and five patented claims, spread across nearly 3,000 hectares, located near GFG’s Pen Gold Project and 10km west of the West Timmins Gold Mine, owned by Tahoe Resources.

After acquiring the Sewell Property, GFG’s Pen Gold and Dore Gold assets will be made of about 700km2 in what is considered to be a prolific gold region.

GFG president and CEO Brian Skanderbeg said: “We believe that the historic high-grade drill intercepts and grab samples on the Sewell Property are part of a four-kilometre-long gold trend that we have outlined in our new structural model.

“Like many historical gold intercepts and occurrences in the Swayze Greenstone Belt, there has been very little to no follow-up drilling or modelling for over a decade.”

Skanderbeg revealed that the company will explore the new claims and follow-up on the historic gold intercepts as part of its 8,000m drill program in the third and fourth quarters.

As per the terms of the transaction, GFG has agreed to issue 390,930 of its common shares to Richmont Mines, which is a subsidiary of Alamos Gold.

Additionally, Richmont will also be eligible to get 500,000 more common shares of GFG based on meeting of a condition within five years after closing of the transaction.

Richmont will get the additional stake in GFG, subject to filing of an independent National Instrument 43-101 technical report by GFG on the Sewell Property and if the mineral resource outlined in it is in excess of 500,000 ounces of gold with respect to the claims covered by the acquired property.

Closing of the Sewell Property acquisition will be subject to certain customary closing conditions such as approval of the TSXV.