The battery storage system is integrated with the 50MW Gannawarra Solar Farm, built west of Kerang in the Australian state of Victoria 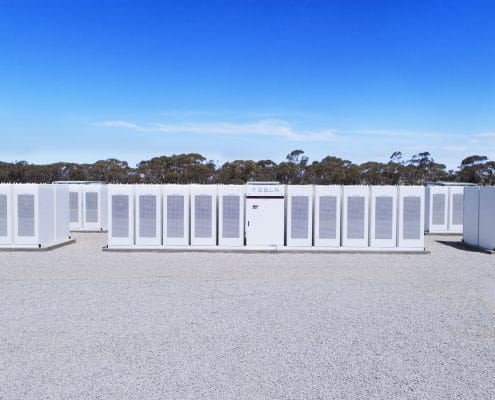 The Gannawarra Energy Storage System, which is a Tesla Powerpack battery, is the first integrated renewables and battery system in Victoria. It is integrated with the 50MW Gannawarra Solar Farm, located west of Kerang.

The battery storage project was developed by Edify Energy while Tesla was the battery provider. RCR Tomlinson was the EPC contractor of the project, which was granted A$25m (£13.65m) funding from the Australian Renewable Energy Agency (ARENA) and the Victorian Government.

The energy storage system is said to be the second biggest battery in Australia for Tesla and during peak demand for electricity, can power 16,000 households for two hours. Charged by the Gannawarra Solar Farm, the 7500m2 battery stores 100% renewable energy, which will be transmitted into the power grid at key times.

Apart from its ability to store and quickly release energy, the Gannawarra Energy Storage System is also expected to help integrate new renewable energy into the Victorian power grid.

The battery storage project is backed by a long-term commercial services agreement with EnergyAustralia, which will operate it in conjunction with the offtake of the Gannawarra Solar Farm. EnergyAustralia had agreed to charge and dispatch energy from the Gannawarra Energy Storage System until 2030.

“We’re proud to make Victoria the leader in renewable energy – that’s why we’re increasing our Victorian Renewable Energy Target to 50 per cent by 2030.”

“By investing in renewable energy and storage technology, we are continuing to modernise our electricity grid, strengthen our energy security and deliver real action on climate change.”