FAR has selected final well location for the upcoming Samo-1 well in its Gambian exploration program. 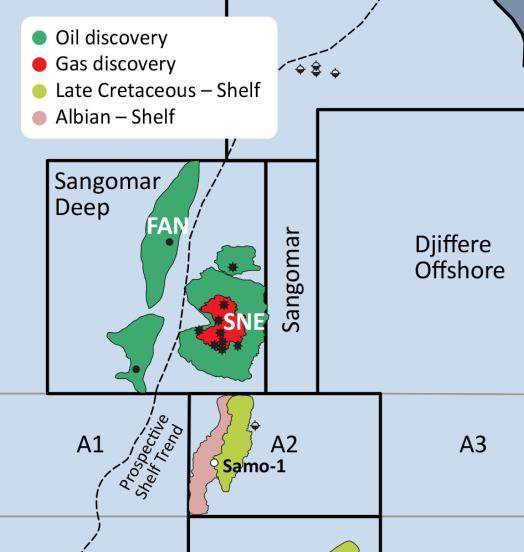 Image: The A2 and A5 prospects and leads showing Samo-1 well location. Photo: courtesy of FAR Limited.

Following reprocessing and interpretation of 3D seismic data, detailed mapping of the Samo Prospect and detailed well engineering, FAR Gambia, a wholly owned subsidiary of FAR Limited, as Operator of the Block A2 joint venture, has approved a Samo-1 well location.

The Samo Prospect lies immediately to the south and along trend from the giant SNE oil field in Senegal – a trend which has so far seen nine successful exploration and appraisal wells (at 100% success rate).

The Samo-1 well will be located in approximately 1,017m water depth and 112km offshore Gambia in the highly prospective Mauritania-Senegal-Guinea-Bissau-Conakry (‘MSGBC’) Basin.

The Samo Prospect has two main targets; an upper reservoir interval which contained liquid-rich gas at SNE and a lower reservoir interval which was oil-bearing at SNE. The two target reservoir intervals are assessed to have a combined Prospective Resource of 825mmbbls of oil (best estimate, unrisked – refer ASX announcement of 21 Nov 2017). Good quality reservoirs have been interpreted at both levels at the proposed Samo-1 well location and the well will be drilled on the crest of the structure.

The Samo-1 well is planned to spud in early Q4 2018 and is expected to take approx. 40 days to drill on a trouble-free basis.

Samo-1 will be the first well drilled offshore The Gambia for 40 years. The well will be drilled using the Stena DrillMax – a state of the art, dual mast, dynamically positioned, deep water drill ship with a rig crew that has extensive international and regional West African experience.

‘We are very excited to be drilling the Samo prospect, which is a large prospect along trend from the giant SNE oil field. Given the nine successful wells drilled on the shelf to date in Senegal and into the key reservoirs in the Samo prospect, the geological chance of success for drilling this prospect is high for a frontier exploration well. FAR retains a 40% working interest in the project and will be operating the well on behalf of the joint venture. If successful, Samo-1 will add significantly to the contingent resource base of FAR and has the potential to dwarf the value of FAR’s portfolio in Senegal.’