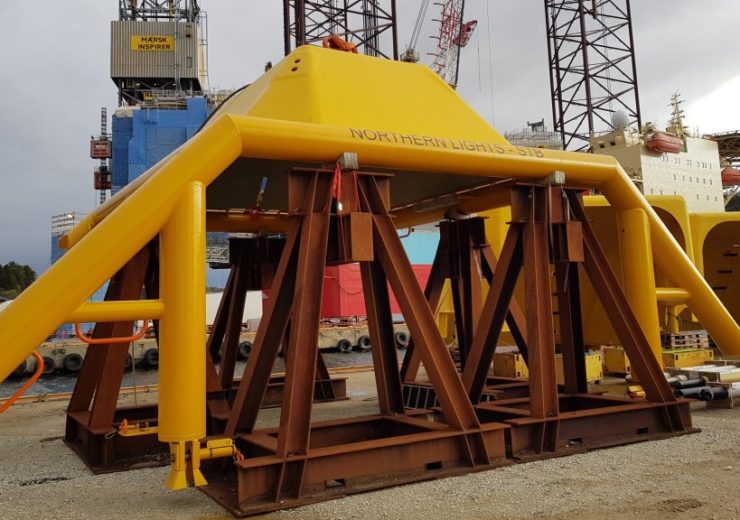 The Northern Lights template prior to installation on the seabed. (Credit: Equinor ASA)

Equinor and its partners Shell and Total have completed drilling of wildcat well 31/5-7 Eos located about 2500m subsea in exploitation licence 001in the North Sea.

The well has been drilled 17.5km southwest of Troll A in the northern part of the North Sea to assess the suitability of the reservoir rocks in the Johansen formation for storage of carbon dioxide (CO2).

Equinor project development senior vice-president Geir Tungesvik said: “This is an important milestone in realising the possibility of a CO₂ storage on the Norwegian continental shelf.

“The preliminary results from the well so far have been positive. The drilling results will now be further analysed before concluding.”

Equinor said that the firms have proved a sealing shale layer and the presence of good quality sandstone in the reservoir.

In the Cook and Johansen Formations, where plans are underway for CO2 store project, Equinor has encountered a total of 173m of sandstone, with good to very good reservoir quality.

Additionally, the well had encountered 75m of sealing homogeneous shale in the Lower Drake Formation, above the sandstone reservoir.

Norwegian Petroleum Directorate CO2 storage project coordinator Eva Halland said: “That was also the case here, where we not only hoped to prove a water-filled reservoir, but a reservoir that would be well suited for injection and storage of CO2.”

Equinor and its partners have acquired extensive amounts of data have through coring, logging, sampling and a production test.

The data will now be assessed for making an investment decision for the Norwegian full-scale project, Northern Lights, for capture, transport and storage of CO2.

The well 31/5-7 is planned to be used for injection and storage of CO₂ as part of Northern Lights project.

The well was drilled to a vertical depth of 2884m using West Hercules drilling facility and was terminated in the Statfjord Group in the Lower Jurassic. Its is planned to be temporarily plugged and abandoned.