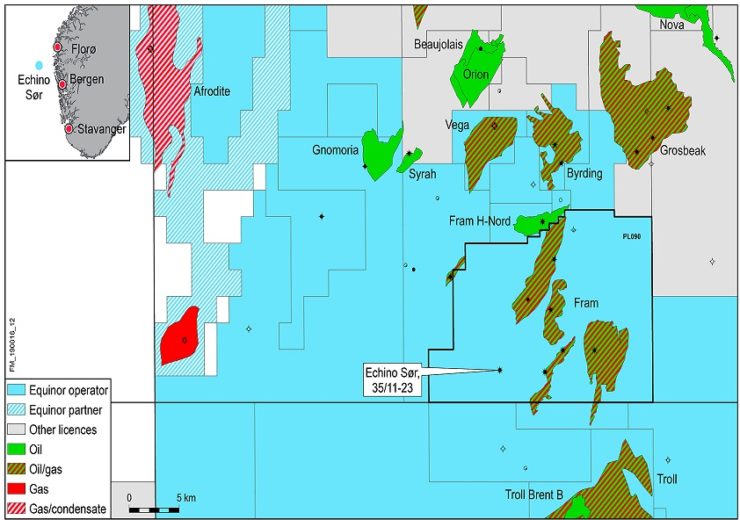 Equinor and its partners ExxonMobil, Idemitsu and Neptune have made an oil and gas discovery at the Echino South prospect in production licence 090 (PL 090) near the Fram field in the Norwegian North Sea.

The hydrocarbon discovery was made following the drilling of the 35/11-23 wildcat well nearly 3km southwest of the Equinor-operated Fram field in the northern part of the North Sea. Using the Deepsea Atlantic drilling rig, the exploration well was drilled to a vertical depth of 2947m below sea level in a 350m of water depth.

In the primary exploration target, the wildcat well 35/11-23 intersected two hydrocarbon-bearing sandstone intervals in the Sognefjord Formation. As per the Norwegian Petroleum Directorate (NPD), the uppermost interval has a combined oil and gas column of around 25m in sandstone.

In the secondary exploration target, the 35/11-23 well came across a total oil and gas column of nearly 35m in the Ness and Etive Formations.

The licensees plan to tie the new oil and gas discovery into existing infrastructure in the Troll-Fram region. Prior to that, an appraisal well – 35/11-23 A will be drilled on the Echino South discovery with Deepsea Atlantic.

Equinor Norway and the UK exploration senior vice president Nick Ashton said: “We are making one of this year’s biggest discoveries in the most mature area of the Norwegian continental shelf (NCS), not far from the Troll field. This demonstrates the opportunities that still exist for value creation and revenue from this industry.”

Equinor Energy holds 45% stake in PL 090, while ExxonMobil Exploration and Production Norway is the second largest stakeholder with 25% interest. Idemitsu Petroleum Norge and Neptune Energy Norge hold stakes of 15% each in the North Sea license.

Details of the Fram field

The Fram field, which is made up of the Fram Vest and Fram Øst fields, has been producing since 2003 via a tieback to the Troll C platform. The field is located nearly 20km north of the Troll field, and is contained at a depth of around 350m.