Eni has signed an Exploration and Production Sharing Agreement (EPSA) with the National Oil and Gas Authority of the Kingdom of Bahrain (NOGA) for Block 1. 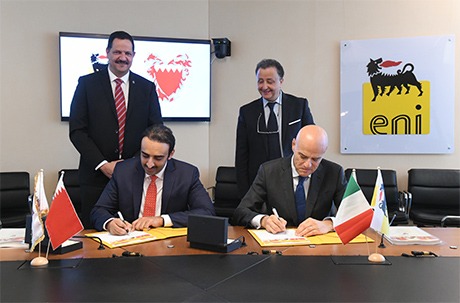 Image: Eni will pursue exploration activities in the offshore area of over 2,800 km2. Photo courtesy of Eni.

The agreement follows a joint study conducted by Eni in 2016 and the signature of the Memorandum of Understanding dated 13th January 2019.

The signing took place in the presence of H.E. Sheik Mohamed Bin Khalifa Al Khalifa, Minister of Oil of Bahrain and Chairman of the board of directors in NOGA, and Claudio Descalzi, Chief Executive Officer of Eni.

Under the terms of the agreement, Eni will pursue exploration activities in the offshore area of over 2,800 km2, located in the northern territorial waters of the Kingdom of Bahrain, with water depth ranging from 10 up to 70 metres.

Thanks to this agreement, Eni strengthens its presence in Bahrain, in line with its strategy aimed at diversifying its exploration portfolio across basins with liquid hydrocarbon potential, as those present in this Middle East region.

In the Middle East, Eni is already present in the United Arab Emirates, Iraq, Oman and Lebanon.