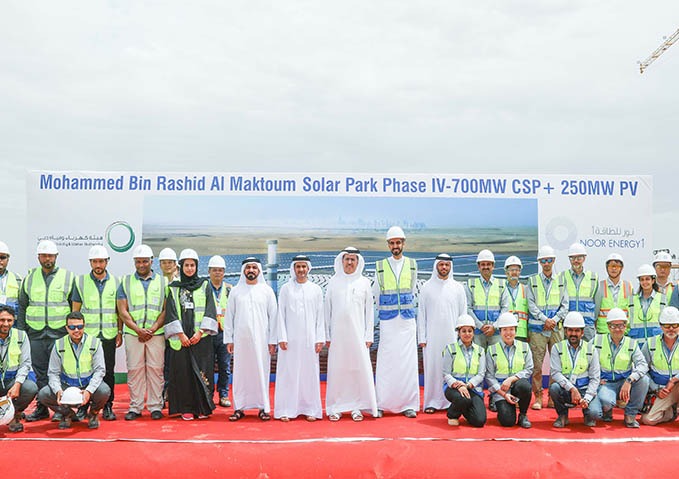 DEWA stated that the concrete base for the CSP tower has now been completed. Once built, the 260m tower is claimed to be the tallest solar tower in the world.

The concrete base contains about 1,300 tonnes of steel rebar and concrete, equivalent to 20% of Paris’s Eiffel Tower. The concrete placed weighs over 19,000 tonnes.

The 950MW CSP project is claimed to be the largest single-site project in the world, based on independent power producer (IPP) model. The total cost of the project is expected to reach up to AED15.78bn ($4.3bn).

The fourth phase of the solar facility will use three technologies to generate 950MW of clean energy. It will use 700MW of CSP, 600MW from parabolic basin complex and 100MW from a solar tower and the remaining 250MW from photovoltaic solar panels.

The phase will generate enough clean electricity to power 320,000 residences, while offsetting 1.6 million tonnes of carbon emissions annually. The project is claimed to be located on 44km2 of area.

The project will use 70,000 heliostats and about 15 hours of thermal storage capacity, allowing for energy availability 24/7.

The Mohammed bin Rashid Al Maktoum Solar Park is a large single-site solar park, based on an IPP model. It is claimed to generate 5GW by 2030 with investments of up to AED50bn ($13.6bn). A 13MW PV was the first phase, which was operational by 2013. The 200MW PV was the second phase of the solar park, which became operational in March 2017.

The 200MW first stage of the 800MW photovoltaic third phase became operational last May. The third phase will be completed in 2020.

Last month, DEWA achieved financial close for the 950MW phase of the Mohammed bin Rashid Al Maktoum Solar Park, through a consortium led by ACWA Power and Silk Road Fund, which is owned by the Chinese Government.