The FSRU is planned be constructed 17.6km southwest of the port of Alexandroupolis, with an LNG storage capacity of up to 170,000m3 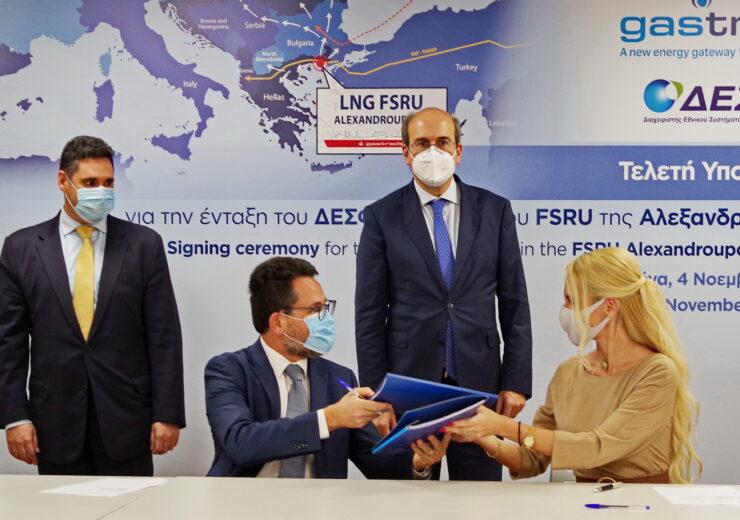 Greek natural gas operator DESFA has agreed to acquire 20% stake in Gastrade, which is developing a floating storage and regasification unit (FSRU) of LNG in Alexandroupolis.

With the stake purchase, the company becomes one of the partners in the project, alongside GasLog Cyprus Investments, DEPA Commercial and Bulgartransgaz.

DESFA said that it has reached the agreement after an in-depth due diligence on all the financial, commercial, legal and regulatory aspects of the project.

The agreement is subject to the approval of the competent Greek and/or European authorities.

DESFA CEO Nicola Battilana said: “We are proud that in this particular socio-economic situation, DESFA is “present” and invests in important projects for Greece and the region.

“The FSRU Alexandroupolis is another important vehicle on the road of energy transition, of which DESFA is an enabler, while it will bring the country to the epicenter of energy developments. We are committed with our know-how to contribute to the successful operation of the project.”

The FSRU is planned be constructed 17.6km southwest of the port of Alexandroupolis, with an LNG storage capacity of up to 170,000m3 and natural gas sent out capacity of more than 5.5 billion cubic meters per annum.

A 28km long pipeline will connect the floating unit with the National Natural Gas System of Greece. The regasified LNG will be transmitted to the markets of Greece, Bulgaria and the wider region, from Romania, Serbia and North Macedonia to Hungary, Moldova and Ukraine.

The floating terminal, which is the European Project of Common Interest, is expected to begin operations by 2023.

The project will have around six billion cubic metres of gas per annum capacity and is expected to cost around €380m ($445.06m).

The offshore storage and regasification unit will feed gas into other pipeline systems, including the Trans Adriatic Pipeline (TAP), in Greek waters close to the Turkish border.

Gastrade managing director Konstantinos Spyropoulos said: “We are happy to have DESFA as a partner in the project. Today’s signing of the agreement is to the mutual benefit of both our companies and most importantly to the benefit of the consumers in SE Europe.

“We are looking forward to taking advantage of DESFA’s significant experience in managing and operating gas infrastructure and maximise the synergies between our Terminal and Revithoussa. We are confident that we will have a very constructive cooperation in strengthening the energy security of our region.”