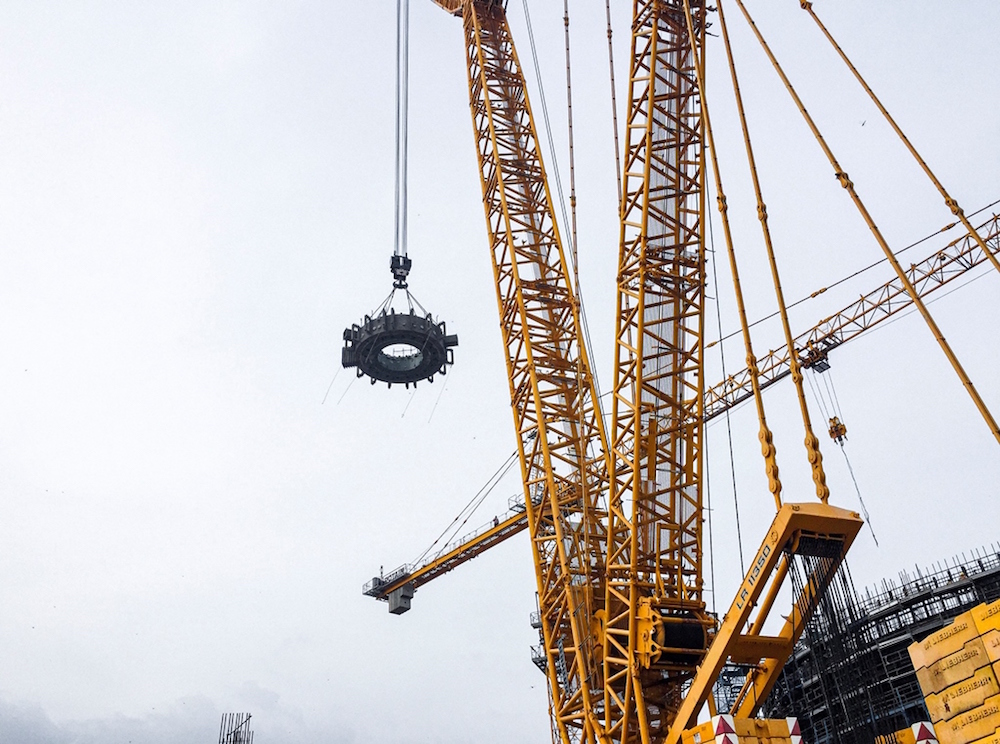 Installation of the core catcher at India's Kudankulam nuclear plant

The second significant component of the core catcher has been installed at unit 3 of India’s Kudankulam nuclear plant during its construction.

A device weighing 145.5 tonnes was installed in position under the reactor shaft with the help of a Liebherr LR11350 crawler crane located between two nuclear islands.

“The work was completed ahead of the project schedule agreed with NPCIL,” said Vadim Khlivnenko, head of the construction department at the Kudankulam NPP for Russia’s ASE Investment Company in India. “Installing the console is an important step on the critical path of the project.”

The truss console is a crucial element of the safety system, protecting the housing and communications of the core catcher device.

Russian state nuclear corporation Rosatom, which is building the plant, completed the installation of the core catcher earlier in December. The casing of the device, which weighed 147.5 tonnes, was also installed using a Liebherr LR11350 crawler crane.

Meanwhile, the reactor pressure vessel and the core catcher for Kudankulam 4 were loaded on to a cargo ship in the port of St Petersburg in December, marking the 13th shipment of equipment for unit 4 of the Kudankulam project, Rosatom said.

What is a core catcher?

The core catcher, also known as a core melt trap, is designed to catch the molten core of a reactor in the unlikely event of a meltdown to prevent it from escaping the containment building.

It is a unique development of Russian nuclear technology.

The melt trap for Kudankulam 3 is a new generation device adapted to the appropriate site conditions and safety requirements, with increased seismic resistance, hydrodynamic and impact strength, as well as flood protection and simplified installation technology, according to Rosatom.

Construction of the Kudankulam nuclear  plant

Kudankulam is one of the largest nuclear power projects in India and is eventually scheduled to have six Russian VVER-1000 reactors.

The power plant is being constructed under a 1988 Russian-Indian agreement that was amended in 1998. The general contractor is Atomstroyexport, and the general designer is Atomenergoproekt.

Construction of Kudankulam 3 – one of two AES-92 design VVER-1000 units under construction as the second phase of the Kudankulam NPP in Tamil Nadu – began in 2017.

A third phase using the AES-92 design is also planned for Kudankulam 5&6. A contract for design work for the third stage of the Kudankulam nuclear plant was signed in August 2017.

Beyond Kudankulam, Russia has ambitious plans to build more than 20 nuclear power units in India in the next two decades.

In September 2019, Russia and India signed memoranda of understanding across various sectors including civil nuclear and LNG.

“Regarding the Kundakulam nuclear power plant, the first and second units are working, Russian President Vladimir Putin announced after arriving in Vladivostok for the 20th annual summit meeting between the two countries.

“The third and fourth are under construction. In addition, we have also decided to set up more than 20 Russian-designed nuclear units in India in the next 20 years.”