The Longonjo Rare Earths Project, which spans 21 km2, is located near the town of Longonjo in central Angola 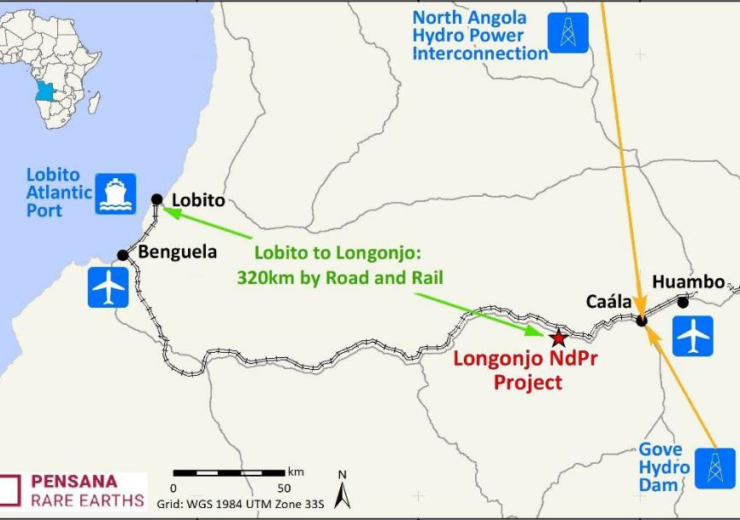 Australia-based Pensana Rare Earths said that its subsidiary Ozango Minerals has secured approval from the Angolan President for the exploitation of the Longonjo Rare Earths Project in the Central African country.

President João Lourenço approved the company’s mining title, which will be valid for 35 years, for the mining of rare earths from the Longonjo mine located near the Angolan city Huambo.

Ozango Minerals has been granted exclusive mining rights over an area spanning 21 km2, located near the town of Longonjo in central Angola, which is said to be well served by established transport and also energy infrastructure.

According to Pensana Rare Earths, the project area covers the Longonjo carbonatite deposit, a proposed open pit mine, processing plant, tailings storage facility and all other related infrastructure needed for carrying out the mining operations.

Angolan Mineral Resources, Oil and Gas Minister Diamantino Azevedo said: “The Angolan Presidential approval of the Longonjo Mining Investment Contract reflects the Government’s strong support for foreign investments which help diversify the economy and bring direct social and economic benefits to the communities in which they operate.

“Pensana’s investment will be one of the largest investments in regional Angola in recent years and will create jobs, provide training, support local businesses as well as improving the social infrastructure within the Huambo region.”

Pensana Rare Earths CEO Tim George said: “The recent investment in the Company by Angola’s Sovereign Wealth Fund underscores the commitment towards the project which will bring major social and economic benefits to Angola and will help accelerate the diversification of the economy away from the oil and gas and diamonds sectors.

“We are excited about developing a mine which will not only create major social and economic benefits – and is being developed to the highest ESG standards – but one which will become a major global supplier of the magnet metals critical to our clean energy future.”