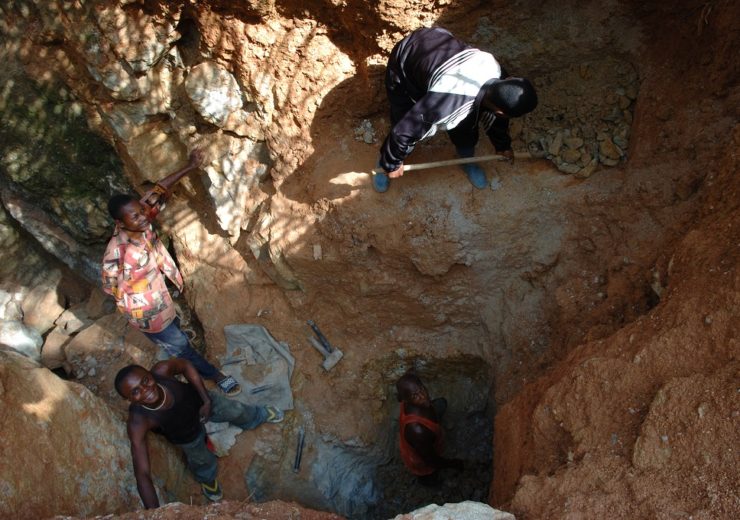 Up to a fifth of the cobalt mined in the DRC is produced by small-scale artisanal labourers (Credit: Julien Harneis/Flickr)

A government project to purchase artisanal cobalt in the Democratic Republic of Congo (DRC) is likely to begin operations in two months’ time, following coronavirus-related delays.

Entreprise Generale du Cobalt (EGC), a subsidiary of the state-controlled mining group Gecamines, was established in January as a means to exert greater control of the market for the critical mineral that has experienced a significant price slump in recent years.

Speaking to Reuters news agency, the DRC’s mines minister Willy Kitobo Samsoni confirmed the initiative had suffered delays due to the onset of Covid-19 in the country, where a state of emergency was declared in March and more than 6,000 cases have so far been confirmed.

He said: “We have to wait two months for the storage sites to be set up, for us to then mandate the launch of state buying of artisanal cobalt. We are in the phase of operationalisation, which has been slowed by Covid-19.”

The DRC accounts for around two-thirds of global cobalt production, and while a host of international firms have developed mining operations in the country as interest in the metal – a key component of electric vehicle (EV) batteries – grows stronger, up to one-fifth of the country’s output is mined by small-scale artisanal workers.

Prices for the metal have dropped significantly in recent years, currently standing at $29,000 per tonne, compared to highs of more than $90,000 per tonne in 2018.

In February, the Congolese minister acknowledged that a private partner might be sought for the venture if the government is unable to generate enough funds to finance the venture.

As well as cobalt, EGC will aim to take control over artisanal production of other metals designated “strategic” by the government – including germanium and coltan.

Cobalt is key to battery manufacturing, but ethical concerns persist

Large, industrial-scale operators like Glencore account for the majority of cobalt mining in the DRC – but there is nevertheless a thriving group of small-scale artisanal miners producing between 10% and 25% of the Congolese output.

This small-scale mining network is largely controlled by Chinese traders, which have established a virtual monopoly over the flow of cobalt within the country.

The aim of EGC is to exert a greater degree of control over the commodities produced by these workers, and gain greater influence over a market that has become a key asset for the national economy as global interest in EV battery manufacturing grows.

Earlier this month, it was reported that Tesla plans to buy cobalt from Glencore’s DRC operations for use in its battery-making gigafactories in Shanghai and Berlin – a deal believed to comprise up to 6,000 tonnes per year.

Technology and manufacturing companies from several industries have descended on the Central African nation to wrangle over its prized cobalt reserves – with household names like Google and Apple among those whose supply chains reach far into its often makeshift mines.

But artisanal mining – particularly in the DRC – is a sector that has been blighted by safety, environmental and human rights issues.

Tesla, along with several other companies that have turned to the Congolese cobalt market, has pledged to ensure the operations it uses to source the metal are free from child labour and other poor ethical standards.

Efforts have been made to improve working conditions for artisanal miners in the country, with industry collaborations combining with technology like blockchain to improve supply chain transparency and promise greater accountability for exploitative employers – but progress has been slow.

Along with boosting government revenues from the commodity, a stated aim of Entreprise Generale du Cobalt is to exert greater state oversight of working conditions in the DRC’s artisanal cobalt mining sector — to address these issues that have damaged its reputation on the world stage.