CITIC Metal to acquire 20% stake in Ivanhoe Mines for $560m

CITIC Metal, a subsidiary of Chinese conglomerate CITIC has agreed to acquire a stake of 19.9% in Canadian mining company Ivanhoe Mines for C$723m ($560m). 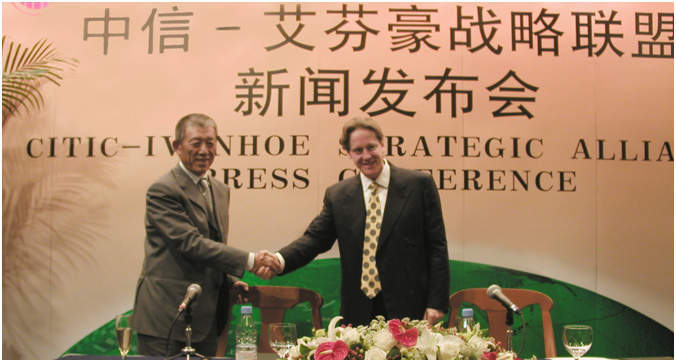 The equity investment from the Chinese firm is expected to help in advancing three mine-development projects of Ivanhoe in Southern Africa which include the Kamoa-Kakula, Platreef and Kipushi mines.

Kamoa-Kakula is a copper discovery on the Central African Copperbelt in the Democratic Republic of Congo (DRC) while Platreef is a platinum-palladium-nickel-copper-gold discovery on the Northern Limb of South Africa’s Bushveld Complex. Kipushi, on the other hand, is a zinc-copper-silver-germanium mine, which is located on the DRC’s Copperbelt.

CITIC Metal has also agreed to give an interim loan of $100m to Ivanhoe. The two companies have been associated with each other for more than 15 years.

Ivanhoe Mines executive chairman Robert Friedland said: “For some time now, the board of directors and senior management of today’s Ivanhoe Mines have been evaluating potential transactions that would combine the critical elements needed for Ivanhoe to advance the development of our exceptional assets that have been established in Southern Africa in recent years.

“A fundamental, qualifying condition has been that any new partner must be complementary to our established partners, Zijin and the Japanese consortium led by ITOCHU Corporation.”

CITIC Metal Group president Sun Yufeng said: “CITIC Metal and Ivanhoe are truly complementary to one another. This cooperation will result in a win-win scenario.

“Together with existing shareholders and stakeholders, and by employing best international practice, we will achieve the gold standard for Sino-Canadian companies, resulting in a partnership that will benefit the people in the Democratic Republic of Congo, South Africa, China and Canada.”

Ivanhoe said that it could raise a further investment of C$78m ($60m) if China-based Zijin Mining Group, its stakeholder since 2015, fully exercises its existing anti-dilution rights via a concurrent private placement. Zijin currently holds a stake of 9.9% in Ivanhoe.