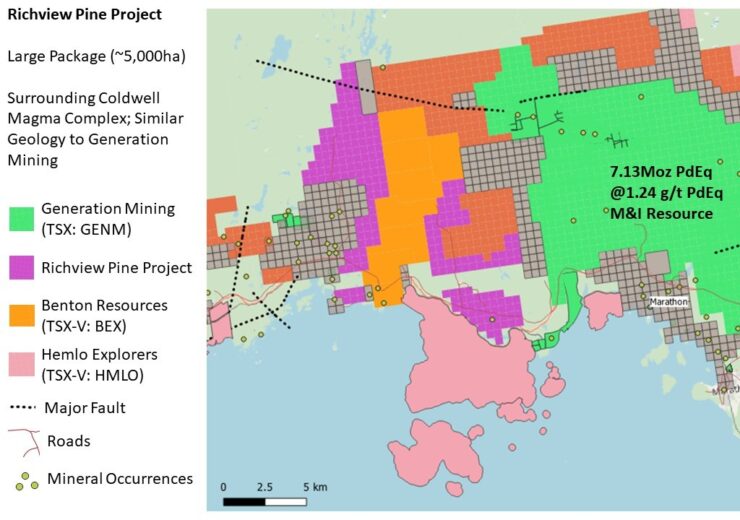 The Richview Pine Project is focused on the western margin of the Coldwell Complex, one of the largest alkaline complexes in North America, which hosts and/or is associated with the platinum-palladium mineralization in the Marathon Palladium deposit. The geology of the Richview Pine Project consists of felsic-mafic volcanic rocks, sedimentary rock assemblages, and gnessic tonalites, which are crosscut by mafic intrusions. Based on past geological work, similar trending faults that intersect the Marathon Palladium Project and the Coldwell Complex may also intersect the Richview Pine Project, and Cameo intends to investigate these potential faults further as part of its upcoming exploration programs.

The Sammy Ridgeline Project consists of regional sedimentary rocks and granitic intrusions, cross-cut by regional east-west trending faults, which are the major controlling structures on the Thunder Bay North property. Similar to exploration work undertaken on adjacent properties, Cameo will aim to explore for ultramafic-mafic intrusions that intersect these regional lithological packages.

The Acquisition was carried out in accordance with the terms of an arm’s length share purchase agreement (the “Purchase Agreement”) dated August 18, 2020 between the Company, 2743282 Ontario Inc. (the “OntCo”), and the shareholders of OntCo (the “Vendors”). Pursuant to the Purchase Agreement, the Company has acquired all of the issued and outstanding common shares of OntCo, which holds a 100% right, title and interest in and to the Properties, in consideration of: (i) issuing to the Vendors an aggregate of 12,400,000 common shares in the capital of the Company (the “Consideration Shares”); and (ii) paying to a certain of the Vendors the sum of CDN$75,000. The Acquisition is subject to receipt of all necessary approvals, including the approval of the Canadian Securities Exchange.