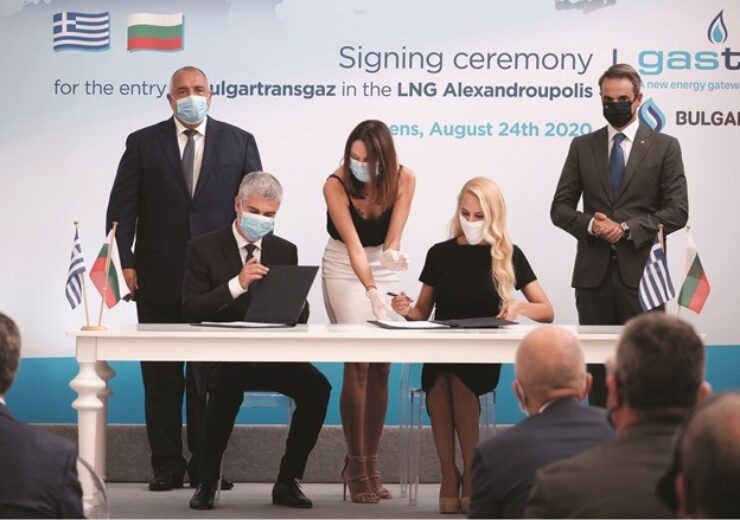 Signing of the deal in August 2020 for Bulgartransgaz’s participation in the Alexandroupolis LNG Terminal. (Credit: GASTRADE)

Bulgartransgaz has completed its previously announced a 20% stake acquisition in Greek firm Gastrade in a move to take part in the latter’s Alexandroupolis LNG Terminal offshore Northern Greece.

The deal, which was signed in August 2020 by the Bulgarian gas transmission operator, was finalised after securing approval from the Bulgarian Commission for Protection of Competition.

The financial terms of the transaction were not disclosed.

Proposed to be built offshore the town of Alexandroupolis, the LNG project will be a floating liquefied natural gas (LNG) receiving, storage and regasification unit (FSRU).

Located at the crossroads of the Southern and Vertical Gas Corridor, the Alexandroupolis LNG Terminal will provide access to LNG to the markets of Greece, Bulgaria, Romania, Serbia, Northern Macedonia, and beyond to Moldova and Ukraine.

Expected to begin operations in 2023, the floating LNG terminal will be connected to DESFA’s National Natural Gas Transmission System via a 28km long pipeline system.

Gastrade stated: “The participation of Bulgartransgaz, that is of the Bulgarian State, in Gastrade is a solid proof of the regional profile of the project and it constitutes a catalyst for the integration of Southeast European gas markets, securing energy liquidity and pluralism throughout the region.”

According to Gastrade, the LNG terminal is expected to complement the Greece – Bulgaria interconnector (IGB) by supporting its viability.

Besides, it is expected to operate in harmony with existing and new energy infrastructures in the region that include the TAP pipeline, the Bulgaria – Serbia interconnector, and the projects being taken up for expanding underground storage capacity in Southeast Europe.