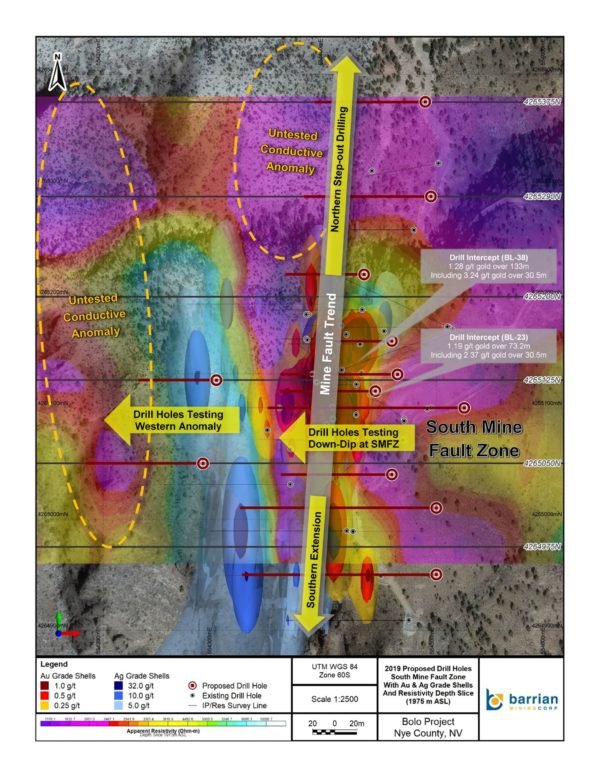 The program is designed to expand the footprint of drill-defined gold mineralization of the Mine Fault trend, both along strike and at depth. Planned South Mine Fault (SMF) Zone step-out drilling will extend to the north and south of previous drill intercepts that graded 3.24 grams-per-tonne (g/t) gold over 30.5 metres within a broader zone of mineralization averaging 1.28 g/t gold over 133 metres in drill hole BL-38, and 1.1 g/t gold over 90 metres including 40.9 metres of 2.05 g/t gold from surface in drill hole BL-39. Drilling will also test a new discovery target, identified by the recently completed induced-polarization (IP) and resistivity geophysical survey.

Kris Raffle, P.Geo., Director and QP stated, “The 2019 drilling program has the potential to expand the historically drilled footprint of SMF Zone mineralization. We eagerly anticipate commencement of the 2019 Bolo drill program, which is designed to build on favorable results from previous drill campaigns by incorporating the recently acquired IP/resistivity geophysical survey results. The newly identified geophysical anomaly west of the SMF Zone is particularly intriguing given its potential to represent a new discovery sub-parallel to the main Mine Fault trend”.

The SMF Zone forms part of a +1.1 kilometre combined gold and silver in RC drill hole and conductive geophysical anomaly coincident with the Mine Fault trend. North of the SMF Zone, geophysical results indicate that previous drill holes often failed to adequately test the Mine Fault conductive anomaly. The planned step-out drilling at SMF targeting the conductive anomaly has the potential to add up to 200 metres of mineralized strike length, with the potential for additional expansion during subsequent programs. The geophysical results also suggest significant vertical continuity of conductive anomalies at the SMF Zone ranging from between 250 and 400 metres depth, the limit of the geophysical inversion. The planned drilling, in part, targets the down-dip extension of previously defined mineralization coincident with these geophysical anomalies. The geologic and geophysical evidence suggests that the previously drilled gold and silver zones at Bolo could be inter-connected along Mine Fault trend structure.

New discovery drilling is planned for an untested, +500 metre linear conductive anomaly located approximately 150 to 200 metres west of the SMF Zone. The anomaly is near surface, of similar amplitude to the Mine Fault anomaly, and ranges from 80 to 200 metres wide and 100 to 150 metres in vertical extent. It is sub-parallel to the Mine Fault Trend and may be part of the same fault system that hosts a distinct silver and gold mineralized zone at the Uncle Sam prospect.