Karabagh field is located 120km offshore, east of Baku, in the Azerbaijan sector of the Caspian Sea 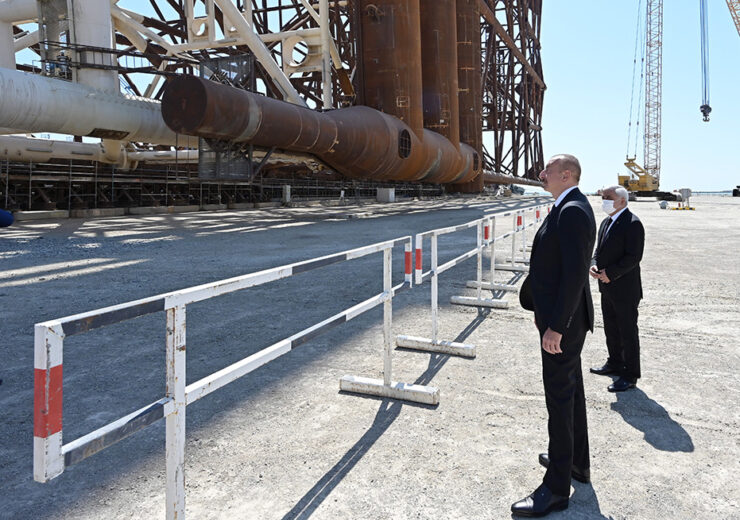 State Oil Company of the Azerbaijan Republic (Socar) has launched the Garabagh jacket, designed to support the upper part of the stationary platform and the deck that is planned for installation at the Karabagh field offshore Azerbaijan.

The Karabagh field is located 120km offshore, east of Baku, in the Azerbaijan sector of the Caspian Sea.

Socar’s BOS Shelf at the Baku Deepwater Jacket Platforms Plant has constructed the Garabagh jacket, which is configured as a grid-type metal structure.

Garabagh jacket to be transported by the STB-1 barge

The 16,000-tonne structure is planned to be transported by the STB-1 barge to the sea for installation at a depth of 182m. It features 10 main and 10 auxiliary legs and walkways along the perimeter.

In March 2020, SOCAR and Norway’s Equinor have made an oil discovery at the first appraisal well at the Karabagh field.

The well was drilled in a water depth of 180m using Socar’s Caspian Drilling Company (CDC)-operated by the Dada Gorgud semi-submersible drilling rig. The field is estimated to hold 60 million tons of oil reserves.

The discovery reservoir is located 3.4km below the surface of the Caspian Sea.

At that time, SOCAR president Rovnag Abdullayev said: “Karabagh is the first oil field discovered during the independence period of our country and its oil reserves estimated more than 60 million tons.”

The Karabagh prospective structure was identified in 1959 following seismic surveys while its oil and gas reserves were confirmed in 1997-1998 through exploration drilling.

In May 2018, Socar Karabagh signed a risk service agreement with Equinor to develop the Karabagh oil field. As per the terms of the deal, the two firms equally own the shares.