Aveon Offshore has completed fabrication of six foundation support structures and loaded the components in respect of Total and its partners’ Egina Subsea Production System (SPS) project in Nigeria. 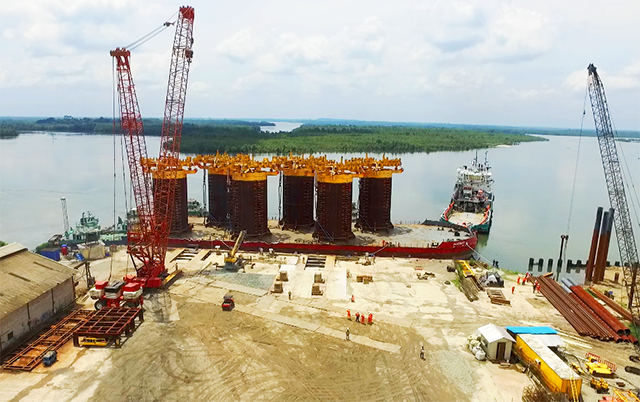 The load out and sail away of these structures occurred at the end of last month.

The fabrication of six Manifolds is also close to completion which will allow delivery during the first half of 2017 together with five completed Subsea Distribution Modules. Twenty one multibore production well jumpers will be delivered throughout 2017 and 2018.

The project is being executed by AVEON Offshore at its 300,000 Sqm fabrication yard in Rumuolumeni near Port Harcourt.

In order to accommodate the workload generated by the project, capex investment was made by FMC Technologies and Total upgrading Aveons’ site in Rumuolumeni.

As a result a dedicated Carbon Steel workshop, Duplex welding facilities and Painting workshops of over 8,000 sqm, Electrical power and distribution and more were added to the yard’s existing infrastructure and existing premises such as Quayside were completely reinforced.

The project has generated more than 3,000,000 productive manhours in the last three years.

Aveon Offshore chairman Tein George said: “The successful completion and delivery of these subsea structures showcases the capabilities of our experienced team and our capacity as a local fabrication yard to deliver complex oil and gas projects meeting safety and quality standards as well as validating Nigeria’s local content vision.”

The board and management of Aveon offshore would also like to thank Total Upstream Nigeria Limited and FMC Technologies for giving us the opportunity to be a part of this project”.