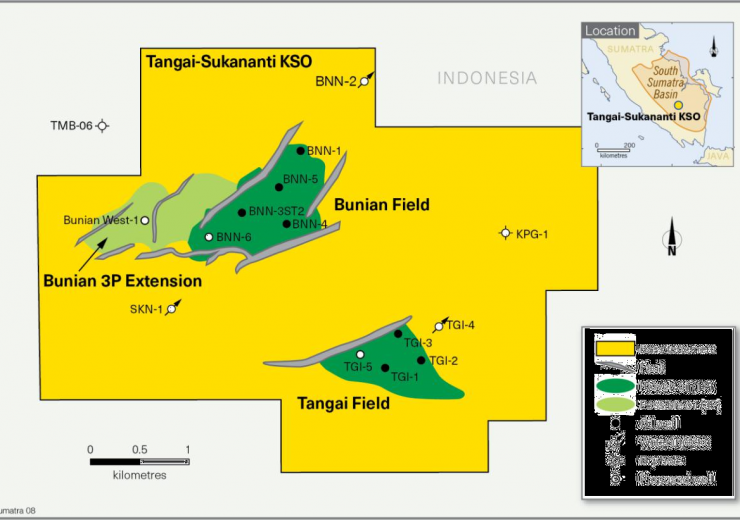 A new program of mainly development drilling in onshore oilfields in Indonesia has been announced by Australia’s Bass Oil (ASX: BAS) as the Melbourne-based producer looks to double its Indonesian oil output over 2022.

In addition, an updated review of the Company’s reserves and resources, released today, has identified sig-nificant potential expansion to the west of the limits of the existing Bunian oil field.

The planned new drilling program, consisting of one firm well and an additional two contingent wells com-mencing late this year, is the first major new work by Bass on its 55% held oil field interests in southern Sumatra since the commencement of the COVID pandemic.

The Company said today a firming in global oil prices this year and the outcome of the resources review have now encouraged it to plan financing and scheduling of a new expansion drilling program aimed at building daily output from ~500 barrels of oil per day from four production wells within its Tangai Sukananti KSO, hosting the producing Bunian and Tangai oil fields.

Managing Director, Mr Tino Guglielmo, said today the Company expects to hold production steady through calendar 2021 with the Company anticipating a restart of its next Indonesian drilling program later this year. The program is aimed at providing a significant boost to production in 2022.

“The next well to be drilled is likely to be the Tangai-5 development well which is expected to intersect a highly productive reservoir section,” Mr Guglielmo said.

“If we proceed as anticipated, we expect to follow up with the Bunian-6 well in the undrilled southwest part of the field, further increasing production and developed reserves. We are also planning to drill a third well to appraise the very exciting Bunian 3P Extension area which we have historically regarded as a future stand-alone exploration prospect but which we now suspect is part of the greater Bunian field.”

The planned new work follows significant success by Bass’ Jakarta and Melbourne-based sub-surface teams over the past year in undertaking a comprehensive, integrated reservoir study which updated the static and dynamic reservoir models following the drilling of the successful Bunian-5 development well.

The study identified a number of production and reserve growth opportunities, including: