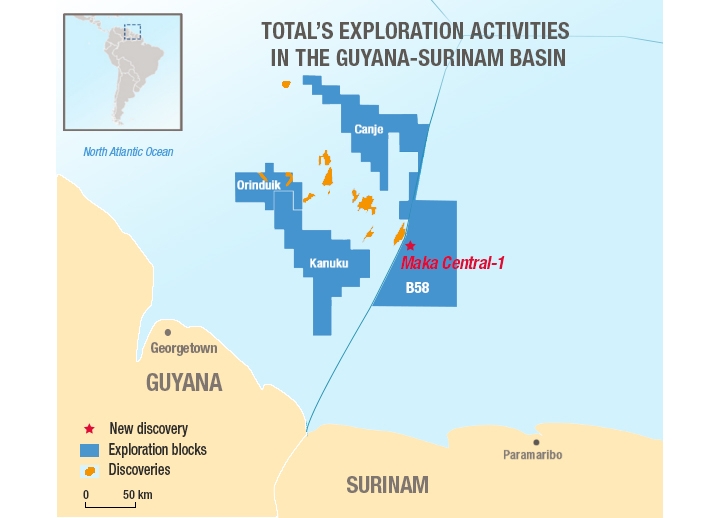 Oil and gas firms Apache and Total have made a significant oil discovery at the Maka Central-1 well drilled offshore Suriname in South America.

The Noble Sam Croft drillship has been used to drill the well, in which the two companies hold a stake of 50% each. Apache is the operator of the Maka Central-1 exploration well.

Drilled by a water depth of about 1,000 metres, the well was tested for the presence of hydrocarbons in multiple stacked targets in the upper Cretaceous-aged Campanian and Santonian intervals.

Further drilling and testing are planned to be conducted to appraise the resources and productivity of the reservoir.

Apache has confirmed that the Campanian contains 50m (164ft) of net hydrocarbon-bearing reservoir and the preliminary fluid samples and test results indicated that the light oil and gas condensate with API gravities of 40 and 60 degrees.

“Block 58 comprises 1.4 million acres and offers significant potential beyond the discovery at Maka Central. We have identified at least seven distinct play types and more than 50 prospects within the thermally mature play fairway.”

Sam Croft drillship will drill next wells in Block 58

The partners have stated that the Sam Croft drillship will drill the next wells in Block 58, beginning with the Sapakara West well, which is located about 20km southeast of the Maka Central discovery.

The well will test oil-prone upper Cretaceous targets in the Campanian and Santonian intervals.

In December 2018, Apache commenced production from its 100% owned Garten development on Block 9/18a Area-W located in the UK North Sea.